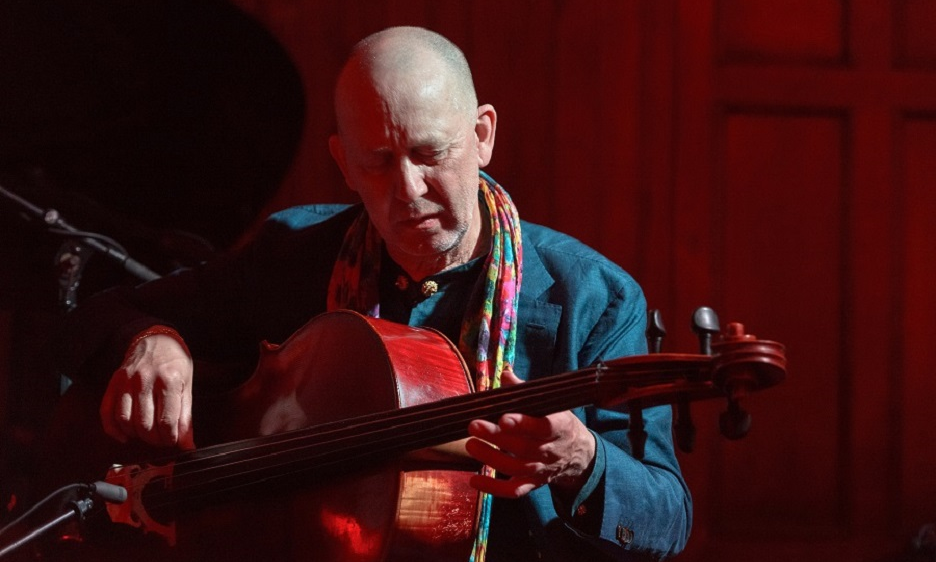 From the hilltop vantage point the Irish Sea lies veiled under a blanket of thick mist. Greystones, five miles to the right, birthplace of the great Christy Doran, peeks out, seemingly floating above the misty clouds like a Roger Dean gatefold. Away to the left, across rocky fields studded with yellow heather, a giant cross marks Bray Head—a pilgrimage site for many during this May holiday weekend. Down below, facing the Irish Sea longer than any other town in Ireland, lies Bray, itself an annual destination for pilgrims of another kind -jazz musicians and their followers.

Bray Jazz Festival returned for its nineteenth year with perhaps its strongest international programme to date, selling out the main theatre three nights in a row and drawing good crowds to the smaller venues around town for the numerous fringe events on the Wicklow Wolf Trail. The wolf logo of the local micro-brewery stands out from the BJF's sponsors' banner, but it's the twenty three sponsors' logos in their totality, from transport systems to hotels, from embassies to arts-funding bodies, from restaurants and bars to the tourism office and national media that hint at how many people are crucial to the staging of the BJF and how much juggling festival directors Dorothy and George Jacob are required to do to pull it off year after year. And pull it off in style they manage to do every year.

And, after a winter that seemed to last for about seven months, the sun finally visited this small corner of the planet, putting smiles on everybody's faces for the traditional holiday weekend.

Bray's Town Hall was the intimate venue for the opening concert of BJF 2018. Violinist Cora Venus Lunny is equally at home in classical, Irish folk and experimental music and is a captivating solo performer as her solo recording Terminus (Conscientae) (Diatribe Records, 2014) demonstrated. Colm O'Hara's background is more rooted in jazz, having played with Dave Liebman, Kurt Rosenwinkel, Tim Berne and Bobo Stenson, though his work with Thought Fox, ReDivideDer and Yurodny points to more eclectic tastes. Both musicians are fine improvisers as this three-part suite of improvised dialog proved.

At times the duo was locked in harmonious unison, at other times each pursued separate yet parallel courses, the intense concentration etched in their body language. At their most expansive Lunny and O'Hara's dialog flowed compellingly, but the music was just as engaging when at its most minimal—the duo conjuring darkly cinematic soundscapes.

At just under forty five minutes this was a short set by conventional standards but for improvised conversations as emotionally intense as these, this was a generous offering from two progressively minded musicians who surely have more stories to tell together.

China Moses has been around longer than you might think, making her recording debut in 1997 with China (Source/Virgin). Moses has dedicated a lot of the intervening years paying homage to female blues and jazz singers but it's only with Nightintales (MPS Records, 2017) that she has stepped out as a songwriter in her own right. It's been a liberating move that has won her international acclaim.

In her first visit to Ireland Moses wove jazz-funk, R&B, blues and soul in a vibrant tapestry, with pianist Ashley Henry, bassist Neil Charles and drummer Marius Alexa providing grooving support. Moses exuded charisma, evoking a smouldering cross between Tina Turner and Eartha Kit on the sultry, slow burner "Put It on the Line" and the powerful neo-soul of "Breaking Point," the latter which featured a fine piano solo from Henry—one of the most promising pianists on the UK jazz scene.

At times Moses' pre-song banter went on a tad too long, with the preamble to the Billie Holiday-esque slow blues "Whatever" almost as long as the song itself. Henry's mesmerizing, rhapsodic solo here, and another impressive outing on the lively "My Part of Town," a soul-jazz tour de force were highlights of the set. That Moses afforded all her musicians such extended time in the spotlight underlined the fact that hers is a proper band and not just a supporting vehicle for her own considerable vocal chops.

There was some Cab Calloway-esque singalong scatting on "Hungover" and further audience participation on "Running" as Moses orchestrated the audience with her easy charm. There was no shortage of energy from Moses and her band but you couldn't help thinking that an engaging set could have had more impact with less chat and more of what she does best.

Making a welcome return to Ireland following its appearance at Dublin's one-off April Jazz festival in 2015, Ernst Reijseger, Harmen Fraanje and Ernst Reijseger, Harmen Fraanje, Mola Sylla closed day one of BJF 2018 with a spellbinding performance in the atmospheric surroundings of the old Methodist Church. Cellist Reijseger's highly original project has to date released two recordings on the Winter & Winter label -Down Deep (2013) and Count Till Zen (2015). Beautiful efforts both, it is however in the live arena that the music really comes to life, with cellist Reijseger's jaw-dropping virtuosity staggering to behold.

The trio began with "Perhaps," with Reijseger's gently chugging rhythm—his cello played horizontally like a guitar—and Frannje's light, sparkling piano embellishments underpinning Sylla's West African vocals and thumb piano ostinato. For "Bakou" Sylla switched to the four-stringed xalam, strumming a simple rhythm on this ancient instrument common to many African countries and widely considered to be the forerunner of the banjo. His haunting vocal was lifted harmonically by Reijseger and Fraanje, the former playing his cello like a bass, the latter enjoying greater freedom with delightful scurrying runs.

Perhaps the highlight of an absorbing set was "Badola"; circling piano and cello motifs combined with Sylla's percussive panoply to establish a platform from which Reijseger launched an impassioned solo that would have made any electric guitarist blush with envy. Sylla then made his way slowly around the church blowing a horn before, coming full circle and singing like a man possessed with the blues into the guts of the grand piano-his voice resonating off wood, metal and string.

For all the individual brilliance, however, it was the trio in harness that provided the most uplifting music. Lyrical, classically-hued cello, jazz-tinged piano improvisations, shamanistic percussive stirrings and Sylla's yearning lamentation fused in a new number that was as graceful as it was moving. The concert closed with Sylla's vocals soaring on a sunny, West African flavored number of dancing rhythms. A standing ovation and prolonged applause summoned the trio back on stage. Reijseger's sawing cello served as the backdrop for Sylla's sombre, introspective vocals, while Fraanje's spare accompaniment lent sympathetic gravitas. Sudden vocals crescendos felt like explosions, the energy dissipating just as quickly. When the music finally ceased the three musicians left the stage but something of their musical poetry remained with the quietly elated audience.

"Good things happen to good people," jazz promoter Dominic Reily told the audience by way of introduction to Linley Hamilton's afternoon concert, which kick-started the second day of BJF 2018. In his multiple roles as BBC broadcaster, university lecturer and bandleader, Hamilton is arguably the hardest-working jazz musician in the Wild West that is Ireland, endlessly criss-crossing the country—trumpet and sheet music in tow—like a character from Wacky Races. A tireless advocate for jazz and its practitioners, particularly the upcoming talent, Hamilton has given much to the music. Now it seems, with Making Other Arrangements (Teddy D Records, 2018) poised for international exposure, the music is giving Hamilton something back.

Having played the very first edition of Bray Jazz Festival trumpeter Hamilton returned with a large ensemble of eighteen musicians for the live premiere of Making Other Arrangements. This project had been a quarter of a century in the making since Hamilton first heard Freddie Hubbard's orchestrally buoyed album Ride Like The Wind (Elektra/Musician, 1982)—vowing then that one day he would realize a similarly inspired work.

With pianist/arranger Cian Boylan, the twelve-piece string ensemble and a crack unit of some of Ireland's best jazz musicians crammed onto the creaking stage of the Parochial Hall, Hamilton led a programme of classic tunes from the popular standard repertoire before a full house. Hamilton's total command of his instrument was evident from the off; on Artie Butler's "Here's to Life" and Hubbard's "Brigitte" both his balladry and his more robust soloing were characterized by the warmth of his tone. Hamilton however, surrounds himself with great players, and there were also telling individual contributions from saxophonists Ben Castle and Brendan Doyle— who both doubled on woodwinds— Nigel Clarke on guitar, drummer Guy Rickarby, and switching between double and electric bass, Dave Redmond.