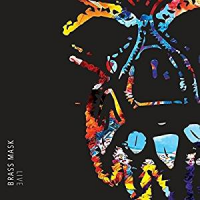 You need a truly modern street band in your musical life. That's a statement. Period. No "buts," no "maybes." You might not know it but it's just what you've been lacking and here it is with Brass Mask's second CD, Live.

I enjoyed their first record, Spy Boy a lot. Here was a band that were investigating the tradition, not just plundering for repertoire or for musical colour or as bricolage. These guys wanted to go back to the source—New Orleans—but wanted to know how that might sound now—in 21st Century London. Live is even better than its predecessor presenting a music that is joyous and raucous but tinged at times with a funereal sadness and darkness. Just like life.

Leader and tenor player Tom Challenger draws inspiration from the Mardi Gras, carnival bands of New Orleans—bands that continue a legacy that goes back to the very roots of the music. But this is a million miles from pastiche. With a hand-picked band of eight of the capital's finest, Live is built upon the sound foundation of rhythms that shift between a solid four-four to more complex polyrhythmic, layers of percussion and upon the virtuoso playing of Theon Cross on tuba.

Challenger has most definitely done his homework. Listen to the way that Li' Liza Jane succeeds in evoking the oft-ignored influence of the black music of the islands just a short distance from Louisiana. From the blues-drenched I Thank You Jesus through the Caribbean lilt and counter rhythms of Nyodi and on to freer territory of the New York and Chicago avant gardes on Francis P, Challenger fashions a music simultaneously old and new. But then jazz was from early on a global music and it is no accident that London is Brass Mask's home. These rhythms have long flowed along the Thames or the Seine or the Rhine or coursed around the Mediterranean, just as they float on the mighty Mississippi.