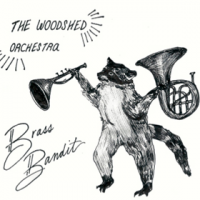 "Curiouser and curiouser!" cried Alice. She was opening out like the largest telescope ever, at the time, but she could equally well have been listening to Brass Bandit, the third release from Canada's Woodshed Orchestra. An eccentric collection of curiosities, featuring musical genres as diverse as Politicized Poetry Love Scatting and Football Funk and checking in "at a Punk Rock 26:26" according to the press release.

The eleven members of the Woodshed Orchestra are credited on the sleeve but there's no indication of who plays what on which track—or indeed who wrote what. Leader Dave Clark plays drums, everybody seems to sing and/or shout at some point, there are trumpets and saxophones and a trombone and a clarinet and maybe a tuba or sousaphone, an accordion turns up from time to time as does a guitar, extra percussion and quite possibly a ukulele. The instruments are all played with great verve, the vocals are enthusiastic, the melodies are never too complex and always engaging.

"Love Letter To New Orleans" is a loose second line style tune with Scott Thomson's trombone at its heart (Thomson's solo is announced, affording a rare chance for this review to name check a soloist). "Basic Count" has a similar feel. "The Surfin' Greek" is a tune in the Greek Surf Jazz style. Do we really need another entry in this already over-populated genre? Well, it's cheery, danceable, redolent of Anthony Quinn in full-on Zorba mode—so why not.

The pretty "Penny + Mousie's Antidotal Lullaby" is a gentle waltz-time song—along with "Prayer" it represents the more thoughtful and meditative side of the Orchestra. On the bouncy "Troubadours" the band declares its identity—"We are troubadours, true blue friends of yours"—to a jaunty marching beat. The acapella "Apolitician" might just be the promised politicized poetry love scat, "The Griff" passes muster as a rollicking piece of brass band funk and "Resplendance" is a klezmerish number, the horns in full flight.

The Woodshed Orchestra has a mission statement of sorts—it exists "to uplift people." A simple aim, but not one that's so easily achieved. So it's a pleasure to relate that Brass Bandit is as uplifting as they come.

About The Woodshed Orchestra