By BRUCE LINDSAY
December 12, 2010
Sign in to view read count 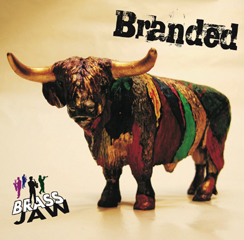 Branded is Brass Jaw's third album since baritone saxophonist Allon Beauvoisin formed the band in 2005. It appears at the end of a hectic year for the Scottish quartet which has included performing at the Rochester Jazz Festival, and gathering great reviews for its series of London Jazz Festival gigs. The band's name is a little misleading, for the line-up actually features three saxophones and a trumpet. Brass Neck might be more appropriate, because this is a band that brims with an in-your-face swagger and confidence, whether it's playing live or on record.

Brass Jaw's four members each contribute compositions, taking responsibility for arranging their own tunes: alto saxophonist Paul Towndrow takes the major share with nine writing credits. The arrangements enable the quartet to play in every imaginable combination: all four players can solo, play rhythm or take the lead line. Combining this flexibility with the different tempos, rhythms and emotions to be found in the album's 17 tunes ensures that Branded is full of variation, invention and surprise.

Baritone saxophonist Beauvoisin is the key to Brass Jaw's strength as a rhythmic, danceable, quartet and it's fitting that his throaty and rich sound opens the album, on tenor saxophonist Konrad Wiszniewski's "Siddharta." Towndrow's "The Well Dented Clavicle" opens with some speedy and precise ensemble bebop, before Beauviosin duets with each of his fellow musicians in turn.

Trumpeter Ryan Quigley's "I Like You" is a more reflective and considered tune, with echoes of a Duke Ellington horn arrangement. Towndrow's "Arthur Digby Sellers Blues" is an upbeat, hard bop-ish tune that showcases Quigley's exceptional ability—his upper register playing is outstanding. Quigley and Wiszniewski are to the fore on Beauvoisin's "Flat Pack Frog," a prettier tune than the title promises, while Quigley is at his most affecting on Beauvoisin's beautiful "Left Unsaid."

Towndrow's arrangement of Frank Zappa's "Peaches En Regalia" gives it a funky edge, followed by Quigley's arrangement of Richard Rodgers and Lorenz Hart's "Little Girl Blue," the beautifully mellow and fluid playing on this tune offering a clear contrast to the Zappa composition.

The cover of Branded features toy cattle painted by the group members in bold and colorful patterns: a hint, perhaps, that the music's power is akin to the red hot metal of a branding iron. But the title of "Arthur Digby Sellers Blues" suggests a link to The Big Lebowski (1998), the cult movie in which Sellers was supposedly the writer of Branded, the '60s TV Western series.

The contradictory and slightly mysterious hints about Branded's title are indicative of the band's humor; the music itself is proof of its talent. Brass Jaw's swagger and confidence is more than justified—Branded is full of powerful, affecting, superbly played music.