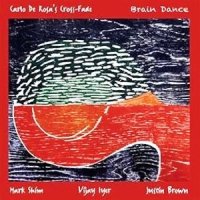 The energy of bassist Carlo De Rosa's Brain Dance is palpable. Musically, it is a close equivalent of an elastic band held extremely taut and then twanged continuously until the kinetic energy continues to do what the fingers once did. However, De Rosa's fingers continue to do what invisible fingers once did to the music as a whole. The bassist finds this energy contained in the strings of his double bass and the electric one he sometimes also plays. His pizzicato and con arco playing are brimful with some kind of primordial cry that is like a silent scream that is heard only in its lowest register. With this he leads his cohort into musical realms that are exclusively his domain. Each pluck of the string releases that pent-up energy that acts like a synapse originating not from the brain, but through the heart to the whole body. This makes for much more than a brain dance, although the allusion is the possible vibration of the heart of the nervous system when it is jolted by the rhythmic shaking of the head. In the case of the music, however, it is the invisible electricity that rages across the body with this extraordinarily remarkable music.

De Rosa might consider himself well blessed to have tenor saxophonist Mark Shim sharing the date, alongside drummer Justin Brown and pianist Vijay Iyer. Having musicians who are connected by the common breath of the soul is truly a rare happenstance and the result is four bodies vibrating as one. This, in turn, produces the music's fibrillations that rocket through "Circular Woes" and the title track. It also results in the aching balladry of "Maja," however the magic here is described in the waning blood-burst that fires the dallying downward shift of the music. Iyer shines with the deliberate nature of his exclusively chosen notes and echoing pedaled arpeggios leading up to a deep and dry solo from Shim's smoky saxophone. There is a swelling seriousness and unbridled playfulness in the music on this album, the suggestion of which turns the music from a somewhat menacing noir to brightly sunlit and plasmatic. This music of changing colors suggests the multi-dimensionality of De Rosa's ingenious playing.

Carlo De Rosa gives notice that he is a serious contender for consideration in the same lineage from which Oscar Pettiford sprung. So, by definition, De Rosa is brazen and forthright. He makes music on a bass alright, but he is so melodic that a hidden thematic line seems to flow from the parabolic lines issued from his bass. Like Pettiford, De Rosa is also a master of harmonic progression. The manner in which he plays off Shim and Iyer is magical in a contrapuntal way. And he inhabits such a low register so low it is barely above a growl. But he also sings in higher sounding registers like a fluttering madrigal on this fine album.