Boz Scaggs at the NYCB Theatre at Westbury 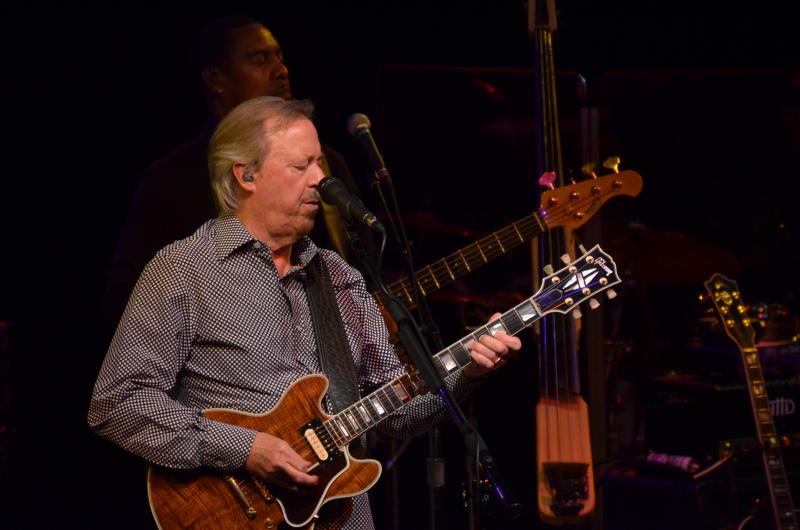 Boz Scaggs first came to prominence as a member of the original and bluesier version of the Steve Miller Band. He secured a recording contract with Atlantic Records in 1968, exited the Steve Miller Band, and in 1969, he released an eponymously titled album. During the past forty-five years, he has recorded as a solo artist and as a member of the New York Rock And Soul Review (with Donald Fagen, Phoebe Snow and Michael McDonald). He has also toured as a solo act, with the New York Rock And Soul Review as well as with Fagen and McDonald as The Dukes of September.

On a warm, spring-like Sunday evening, Scaggs and his band arrived in Westbury, NY and from the opening notes of "Runnin' Blue," from 1971's Boz Scaggs & Band (Columbia Records), raised the temperature inside the intimate arena. Scaggs, was in fine voice as he treated the audience inside the venue to a taut career-spanning trip down memory lane. Though Scaggs and his band led the crowd on a tour of his '70s and early '80s "golden era" output, the performance also leaned heavily on the new songs (from Memphis, his 2013 release on 429 Records) "Mixed Up, Shook Up Girl" (a cover of the Mink DeVille tune), "Dry Spell," "Rainy Night In Georgia," and "Corrina, Corrina."

After the applause died down (following the opening number), Scaggs thanks the crowd and announced, "We're going to mix it up a bit tonight and play things from a bunch of different places. This one is by Willie DeVille." The ensuing version of "Mixed Up Shook Up Girl" was a mid-tempo gem—bittersweet, soulful and true to the DeVille's original.

Scaggs introduced the Jack Walroth-penned "Dry Spell" as having been "written by a friend of mine, a harp player out of Chicago; he called it his dry spell." The bluesy song featured keyboardist Michael Logan on the melodica, a type of key-flute that is capable of producing a sound similar to a harmonica (but features a mouthpiece that fits into a hole on the side of the instrument and a small keyboard). He introduced "JoJo," from Middle Man (Columbia Records, 1980) as a song from his Hollywood years that he wrote with David Foster.

A stool was brought out for Scaggs to sit center stage. He sat down and addressed the crowd. Speaking conversationally as if he were in his living room, Scaggs told a story about a recent performance in during which he and the local San Francisco musicians played a memorial show for a recently passed friend. Tony Joe White's "Rainy Night In Georgia" and the gorgeous "Corrina Corrina" came across as living breathing stories rather than songs that were both written over 50 years ago.

The performance continued with sharp, crisp and letter-perfect readings of "Gone Baby Gone (with its flowing keys and guitars as well as the plaintive "it just doesn't matter to me" lyric) and "Lowdown," from Silk Degrees (Columbia Records, 1976). "Miss Sun" featured a call and response interplay between Scaggs' guitar and backing vocalist Ms. Mone't. Scaggs' guitar work was full, bright and twangy as he mimicked Ms. Mone't's vocal gymnastics. After the song Scaggs introduced the singer to the crowd. He hugged her and announced "we're going to feature her on a song now." Ms. Mone't brought the audience to its feet with a soulful medley of Sly Stone's "Thank You (Falettinme Be Mice Elf Agin)" and Sam & Dave's "I Thank You" that finally segued into a slow-burning version of "Proud Mary." Ms Mone't's spirit and aplomb was infectious. Her performance was a revelation. Her stage presence was something that few have, many wish they had, and even fewer can properly harness. When she declared, "Welcome to the Church of Mone't! Happy Sunday!" the audience reacted as if it was in tent at a revival show and a crippling disease had just been cured by a miracle worker. This was not lost upon Scaggs. He spent the majority of her featured performance standing off to the side, only occasionally playing while drinking-in her performance and looking on with a combination of awe and admiration. The standing ovation, led by Scaggs was long and well-deserved.

The show wound down with "Look What You've Done To Me" (from the movie Urban Cowboy), and a rousing sing-a-long version of "Lido Shuffle" also from Silk Degrees. The audience rose to its feet again and gave the band a richly deserved standing ovation replete with whistles, cheers and calls for more.

Quickly returning to the stage as the applause reached even louder and deafening levels, the band played a strong version of "What Can I Say" (another from Silk Degrees). Scaggs then came forward for the last time. He stated, "We're going to leave you with the blues this Sunday. We got a lot of requests for this one. We hope you like it." The band then kicked into the slow burn blues of "Loan Me A Dime" from his sole Atlantic Records release, 1969's Boz Scaggs.

All in all, the evening's performance was a tour de force of roadhouse blues meets blue-eyed soul that delighted many fans (especially the guy at the back of section D who spent much of the evening screaming for Scaggs to play "Loan Me a Dime."). When the fan was finally satiated, as the show came to an end, he and his friends reacted as though Scaggs had played the song just for them. A show at the NYCB Theatre is very much an up close and personal experience. It is not all that much bigger than a club. In many ways, due to the warmth and intimacy that the venue exudes, he had.