By GLENN ASTARITA
November 13, 2018
Sign in to view read count 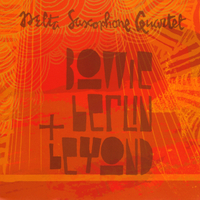 This first-rate UK-based saxophone quartet has been in existence since 1984, and it is celebrated for its thought-provoking reimagining of well-known works from progressive rock icons such as King Crimson on Crimson! (Basho Music, 2016), and a cunning slant on Soft Machine, Dedicated to You... But You Weren't Listening (Moonjune, 2007). Here, the musicians derive inspiration from David Bowie's Berlin years and the significance of his association with producer, composer and trailblazing ambient-electronic artist, Brian Eno.

The immaculate audio adds a luster to the saxophonists' presentation, other than highlighting the multi-layered arrangements, as the quartet focuses on the memorable harmonious attributes of each piece. Although the album is not a syrupy homage. In effect, the musicians flaunt their jazz chops with savvy in such a manner that neither the rock nor the jazz elements blatantly override each other. Thus, jazz mechanics and soundscapes are in accord with the core elements of each piece as the band doesn't steer these works into middle-of-the-road, note-for-note readings. But on the flip side—other than on a few self-penned free-jazz interludes—they don't turn Bowie and Eno's song-forms into cosmic free-for-all blowouts. Indeed, the seamless integrations of genres convey quite a bit of focus and planning without conceivably alienating the rock die-hards or jazz enthusiasts.

John Winford is credited with sonic design in the personnel listing, so it's alleged he plays digital drums and keys on select tracks. Nonetheless, the band imparts a personal spin on Bowie's time-honored "Heroes" via a somber and somewhat introspective musing of the primary theme, along with stark contrasts and plenty of counterpoint. They do dwell in close quarters to the original comps, where melody is an omnipresent attribute amid kaleidoscopic patterns, spicy solos and abstract detours. Yet "Hunky" is a free improv piece with an off-centered circus-style theme and walking grooves, "Dory" is similar in scope, as the band enacts a polytonal vista with fluttering notes and multipart dialogues.

Bowie's" The Laughing Gnome" was released in 1967 as a single and predates his Berlin epoch. Here, the quartet builds the primary theme with a light touch, paced by Chris Caldwell's popping baritone sax notes and weaving horns until they settle into a punctual motif. And they construct Bowie and Eno's collaborative piece "Warszawa," with bridging horn parts, melancholic harmonies, extended note accents and sublime undertones, signaling imagery of a sacred journey.

"Merry Christmas, Mr. Lawrence" was composed by Japanese musician, Ryuichi Sakamoto for the 1983 film of the same name, starring Bowie and Tom Conti. It's one of those ballads that become embedded in your mind. For example, the quartet revitalizes the rather penitent, yet hummable theme with fragile underpinnings and a soft, velvety rendition of the primary hook. And Eno's classic "Music for Airports" is judiciously treated with a tranquil and recurring melody line.

Delta Saxophone Quartet is a group that should not go unnoticed, and for the uninformed, these artful and insightful expositions of Bowie, King Crimson and others should more than arouse the musical appetites of staunch prog rock enthusiasts and open-minded jazz devotees. And the entertainment-factor is sky high...