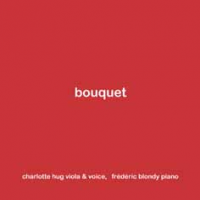 This meeting of French pianist Frédric Blondy and Switzerland's Charlotte Hug on viola and voice was studio-recorded in March 2008 in Paris. Performing as a duo since 2005, Hug and Blondy continue to do so. The album sleeve bears a phrase that is increasingly seen in recent years: "No overdubbing or electronic modification was used." In other words, everything on the album was played by the two musicians in real time. However, the aural evidence may lead some to doubt that; at times, it suggests that several players are at work rather than just two, so complex and detailed are the soundscapes.

In his sleeve notes, Dan Warburton—himself no stranger to the violin and piano or to Blondy, with whom he has played—comments upon the risks of combining a stringed instrument with piano, citing as evidence the differences in their tunings. But, he says that once going beyond the traditional boundaries of normal technique, the question of compatibility is of little or no importance. Together, Blondy and Hug demonstrate the truth of that statement. In addition to frequent passages of conventional playing, each of them goes way beyond the boundaries of normal technique. So, Hug employs her slackly-strung "soft bow," which allows all four strings of her viola to be played simultaneously, giving her the capacity to create polyphonic drones. As on other recent recordings, she also uses her voice alongside her viola, frequently emitting small sighs or moans of pleasure. Blondy plays inside his instrument, extracting uncharacteristically high-pitched metallic tones and glissandi.

Throughout, the pair is entirely compatible, doubtless because of the years they have accumulated playing together as a duo. Each of them brings a wealth of experience playing in a range of contexts, plus many other influences, to the duo. But when they play together, rather than making all of that history explicit, it informs their reactions to each other and their shaping of the music. The end results show that both Blondy and Hug are skilled improvisers able to make split-second decisions in response to each other and to the overall flow of the music they are creating. Across the twelve tracks, that music is richly varied but consistently high quality, fluent and engaging.