By CHRIS MOSEY
January 1, 2015
Sign in to view read count 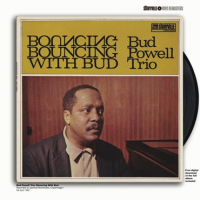 This album has cropped up in various guises over the years. Most recently it was part of Storyville's In Copenhagen series." It's back, as part of the same label's Remastered Vinyl collection.

Powell was one of the most talented yet tragic artists in jazz history, a giant of the bebop era who translated Charlie Parker's harmonic ideas onto the piano, but whose life was blighted by mental illness, exacerbated by alcohol and drug use.

At the end of the 1950s he moved to Paris with Buttercup, an American woman who may or may not have been his wife. According to Francis Paudras, a jazz fan who befriended Powell and wrote about his life in the French capital in Dance Of The Infidels (Da Capo Press, 1998), Buttercup kept Powell sedated and took most of the money he made.

During this unhappy time, Powell visited Scandinavia, where—on April 26 1962—he cut Bouncing With Bud in Copenhagen for the now defunct Sonet label. The bassist on the session was Niels Henning Orsted Pedersen, only 15 years old.

Relieved of domestic misery, Powell delved joyously into the past for his repertoire, kicking off with "Rifftide," a medium tempo bop number based on the chords of "Lady Be Good."

It's followed by "Bouncing With Bud," one of his most successful compositions. It no doubt brought back happy memories of the classic 1949 recording he made of the tune with the legendary Fats Navarro on trumpet and Sonny Rollins on tenor.

ADVERTISEMENT
Then there's Denzil Best's "Move," recalling a 1950 session with Charlie Parker. Later Bird refused to play with Powell, telling people, "He's crazier than I am."

There are two songs by his friend Thelonious Monk, the blues-based "Straight No Chaser" and "52nd Street Theme," which Powell sometimes used as a signature tune, recording it with Kenny Clarke in 1946 and with his own quintet in 1949.

Francis Paudras wrote of Powell: "Emotion flowed out of him. There are different kinds of emotion: there is the easy, superficial kind, and there is another kind, that doesn't make you laugh or cry, that doesn't make you feel anything but a sense of perfection. That's what I felt with Bud." It can be felt here, if you listen carefully.

Side A: Rifftide; Bouncing With Bud; Move; The Best Thing For You. Side B: Straight, No Chaser; I Remember Clifford; Hot House; 52nd Street Theme.