By GLENN ASTARITA
August 7, 2009
Sign in to view read count 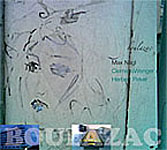 Austrian reedman and multi-instrumentalist Max Nagle has recorded for several, prominent European modern jazz labels. He's a master craftsman who resides as one of the wittiest performers within the new music and progressive jazz realms. From album to album, Nagl pulls previously undetected tricks out of his bag as his artistry equates to a marvel of invention to coincide with this democratic trio engagement.

With Boulazac, Nagl seamlessly fuses disparate genres into a jazzy feast. On the opening "Boongalow," he fuses a 4/4 1960s style rock vibe into a mood-evoking, prog-jazz motif, treated with sampling effects to counter the rhythm section's thrusting pulse. In other regions, Nagl uses a toy guitar and banjo atop Clemens Wenger's dirty electric piano voicings and bizarre electronics-based shadings. They dish out some heavy-handed prog rock-like unison choruses as well.

Marked by driving cadences and Wenger's raspy-toned keys, the musicians also contort and refresh various themes while rendering a few ethereal passages. The band also straddles the avant-garde in concert with various shifts in strategy. Nagl multi-tracks alto sax and clarinet on the quaint, Viennese waltz vibe of "Blues in Erdberg," where he conjures up imagery of a ballroom dance for one.

Nagl integrates Eastern folk and jazz-fusion into the agenda, yet through it all the music is branded by an authoritative entity, bearing the unit's distinct approach and savvy technical excursions. Indeed, the musicians shun mediocrity.