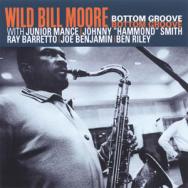 In all honesty, the tile track of this disc, “Heavy Soul,” really says it all. Tenor saxophonist Wild Bill Moore lives up to his name with some rowdy slap tonguing and a clarion call that is not unlike that of another neglected tenor man of the ‘60s, Blue Note’s own Fred Jackson. His high note squawks at the end of the cut might have even given James Carter something to think about if he had copped these sides. Don’t expect innovation and deeply moving commentary here, just the kind of finger snapping stuff that sounds great in the blue shades of the evening and after a few brews or two.

Both cut in 1961 for Riverside Record’s Jazzland subsidiary, Wild Bill’s Beat features Moore with Junior Mance and his trio, while Bottom Groove goes for the organ combo sound as fostered by Johnny Hammond Smith. Ray Barretto adds some wild congas on “Just You, Just Me” and Hammond brings things down to a simmer for “Sea Breezes,” a gorgeous ballad item that shows Moore was capable of more substance than his Illinois Jacquet-inspired showboating usually hinted at.

Both of the albums contained herein have been long unavailable and are among the most obscure items from the Jazzland catalog (I’m still waiting however, for a reissue of the extremely rare Jazzland set by The Metronomes). But even putting that aside, there’s certainly enough substance and joie de vivre here to reward any mainstream fan, especially those who might already dig Junior Mance and Johnny Hammond Smith.