James Cammack: Both Sides Of The Coin: Part 1

By IAN PATTERSON
October 9, 2012
Sign in to view read count 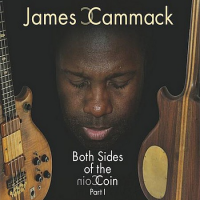 Though James Cammack began on electric bass in the mid-1970s, he's best known as the double-bassist for legendary pianist Ahmad Jamal, a role that kept him on his toes for a remarkable 29 years. Cammack has graced many of Jamal's best latter-day recordings, but it's really live, locking horns in an improvisational cauldron with Jamal and drummers of the caliber of Idris Muhammad and Herlin Riley, that Cammack's own talent as an improviser and accompanist are best seen. Cammack reverts to the electric bass for his debut as leader, and presents originals that strike an impressive balance between compositional depth, melodic appeal and improvisational swagger.

Besides bass, Cammack plays keys/synthesizers, and his imaginative programming paints a wide range of tones and colors. On the lively "Where You Going," a steel drum motif pulses throughout while Cammack's layered bass lines provide rhythmic anchor and melodic lead. Drummer Kim Plainfield's polyrhythmic bustle and guitarist Robert Baglione's fluid jazz-rock lines bring an urbane edge to a very contemporary sounding composition that evokes the bop-centric excursions of guitarist/composer Frank Zappa. One Jamal trait that characterizes Cammack's music is a sense of continual motivic development; melodic motifs act as starting points for most of these compositions—often serving too as rhythmic/melodic mantras—on tunes that are in a constant state of becoming.

Cammack takes care of all the business on "How Long...How Long...," a basic rhythm track and light, washing synthesizer providing the backdrop for the bassist's lyrical playing. "Nomad" is another subtle vehicle for Cammack's lyricism—seen as much in his songwriting as in his soloing—with pianist Alan Eicher and Baglione, on acoustic guitar, significantly coloring this simple but pretty tune. Cammack's natural melodic flair, prodigious technique and adherence to music over exhibitionism place him squarely alongside modern masters of electric bass such as Jimmy Haslip and Matthew Garrison.

"And Then" is a steadily grooving number driven by drummer Steve Haas. Cammack's melodic hooks and contours seduce from the get-go and never relinquish their hold. Guitarist Norman Johnson and tenor saxophonist Ken Gioufree both carve impressive solos which add textural contrast, though the final word belongs to Cammack who weaves a wonderful solo that ripples and purrs like a bubbling brook. Cammack's deft keyboard work defines these compositions almost as much as his bass, inducing the tone of a vibraphone on the sophisticated pop that's "New and Different View" and a delightful, flute-like vibrato on "Life Not Easy."

The "Rise and Fall of it All" is essentially a steady groove with a series of interconnected solos from saxophonist Paula Atherton, Baglione, and Cammack, though there's a level of sophistication in the subtle arrangement that elevates the music above much modern jazz-fusion. "Looks That Way" is an episodic number, anchored by a mantra-like keyboard/guitar-led motif. Pianist Leandro Lopez-Varady's tumbling piano lines and Carl Coan's swirling EWI provide contrasting elements in a powerful closing number, where Cammack shows his considerable chops.

This is a very impressive debut, which will hopefully pave the way for further solo statements— whether on acoustic or electric bass—from one of the most unassuming yet most talented of modern jazz bassists.

Where You Going; How Long…How long…; New and Different View; Nomad Intro; Nomad; And Then; Life Not Easy; The Rise and Fall of it All; Pursue to Move Forward; Looks That Way.