By BRUCE LINDSAY
November 12, 2010
Sign in to view read count 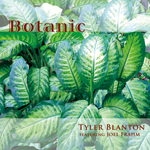 Vibraphonist and composer Tyler Blanton's debut, Botanic, introduces the young musician as a lyrical and compelling player and composer. Blanton refers to himself as grounded in bebop and straight-ahead, but open to other approaches, a description that matches this eclectic collection of tunes.

When Blanton solos his qualities as a player are clear, helped by the excellent production quality on the album, recorded at Brooklyn's Systems Two Studio. His playing style is melodic, bright and emotionally upbeat, matched by his compositional approach, which similarly favors melody, swing and optimism.

Blanton's unaccompanied opening to "Already Here" suggests the strong influence of the Modern Jazz Quartet and its vibraphonist, Milt Jackson. There is a classical feel to the tune, and Blanton's playing is lyrical, if a little restrained. However, when bassist Daniel Loomis and drummer Jared Schonig enter to kick the tune up a gear it becomes more up-tempo and swinging. The album's other trio performance is "Little Two," a beautifully played piece, but one that feels more like an extended solo than a distinct tune.

Saxophonist Joel Frahm adds contrast and color to the rest of the tunes, his soft-toned playing on both tenor and soprano an effective counterpoint to Blanton's brighter-sounding vibes. His soprano work on the boppy "Good Ol' Joel" is breezily good-natured and warm, his tenor on "Foreshadowing" more reflective and thoughtful. In both cases, he captures the mood of the piece with precision and inventiveness.

Blanton opens and closes "Mellow Afternoon" alone, his instrument ringing out with a beautifully crystalline sound, and the vibraphonist demonstrating the confidence and control to leave plenty of space in his playing, reflecting the mellowness of the title. The rhythm section for "Mellow Afternoon" is bassist Aidan Carroll and drummer Richie Barshay, both musicians playing in a soft, floating style that is crucial to the tune's atmosphere.

Botanic is a fine and, at times, inspired debut from Blanton. Engaging and optimistic tunes, and warm, lyrical performances, are surefire ingredients for success: Botanic has them both.