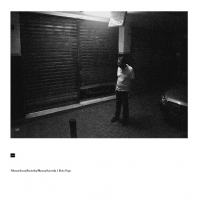 There are secrets revealed and the true identities of musicians often emerge, not under the guidance of a music producer, but within the allegiances they form as they freelance around the world. Take Norwegian drummer Paal Nilssen-Love, for instance. Early (very early) in his career he (and bassist Ingebrigt Håker Flaten) backed players like Bugge Wesseltoft, Zim Nqawana, and Peter Wettre. But then his noisier free jazz propensities began to be revealed. The pair went on to form the jazz/garage rock band The Thing, and record with Atomic, Circulasione Totale Orchestra, and in School Days, to name just a few. It can be argued his most innovative music making is with players who never shy away from the extremes, like Peter Brötzmann, Mats Gustafsson, Massimo Pupillo, and Raoul Björkenheim, and Lasse Marhaug.

In 2014 he recorded this live concert in Rio de Janeiro with the Brazilian musicians, electric guitarists Eduardo Manso and Arthur Lacerda (Chinese Cookie Poets), and electric bassist Felipe Zenicola. All three partners are active in Brazil's hardcore new music scene, one that Chicago ex-patriot Rob Mazurek has mined for its radical and innovative approach to music making.

Originally released on his own PNL label as a CD, Bota Fogo it has been re-released as a limited edition 140 gram 12" lilac colored vinyl of 200 copies. The two sides, each approximately 12 minutes in length, deliver that stentorian gut punch of sound that should come with a warning not to place breakables on your subwoofer.

"Bota" opens with Nilssen-Love's solo, a thunderous route through bass drum, sticks, and, ultimately, a heavy groove that the others play upon with an oozing bass line and frizzy guitars. Their music is a sodden funk/rock that threatens to come unbuttoned at any moment. Nilssen-Love controls the pace here, upping the velocity and thickening the groove. Tiny Bradshaw's composition "The Train Kept A-Rollin,'" which was covered by Led Zeppelin and Aerosmith, come to mind here.

"Fogo" opens quieter, with echoey guitars and an untidy snap and punch that turns into a pulsing demon with lava flow guitar effects. The music would have made Sonny Sharrock smile.