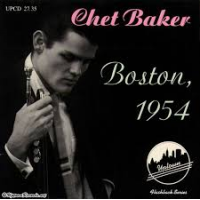 Is there any reason to write anything more about Chet Baker? Stuff of legend, subject of multiple books, focus of a classic documentary: Surely, someone, somewhere hadn't written a doctoral dissertation on him in American studies. Great player, not so great person, or, whatever kind of person, not so great player. You sort of get to choose which Baker you want. Whether it's an idiotic greeting to pianist Romano Mussolini (did he really say: "Sorry about your old man")?; or performing legendary sex acts: Baker gave new meaning to the term "triple tonguing" ; infuriating bandmates; or inspiring a one-word evaluative dismissal from the great and affable Clark Terry: "Next," his demise was suitably mysterious even as his life and previous resurrections had made him a celebrity in the pages of Time Magazine. Truly, a Baker for all seasons.

Some of Baker's early playing on the West coast, even the rawest of recordings from jam sessions at the Tradewinds in Los Angeles are pretty impressive on first hearing. Similarly his recordings with Gerry Mulligan, especially Reunion from 1957, with its almost unimaginably facile (but, alas, flawed) solo on "Surrey With a Fringe on Top." Yet this inaugural live recording on the East Coast from March 1954, was unfamiliar. This was, after all, soon after Baker swept the Downbeat and Metronome polls, to everyone's surprise, including, apparently, his own. Baker had just set out on the road with Russ Freeman, Carson Smith and Bob Neel. This is a historic series of radio broadcasts, which the Flashback Series from Uptown does so well. So I listened. And listened. And frankly, after repeated listening, wondered how the hell Baker had ever managed to cause such a sensation.

These are all radio performances from the Copley Square Hotel. Usually, live broadcasts generate a buzz. Perhaps it was just the problem of having to fit his playing into a format that ran less than half an hour—Baker couldn't stretch out at all—but it would be hard to find a more anodyne recording. Baker introduced his numbers, and he sounds startlingly young and oddly without affect. There is only one vocal, on "Time After Time." Baker does "Funny Valentine" twice, once starting with a drum roll introduction intro that sounds nearly camp. For the rest, with one or two exceptions, Baker's playing lack anything approaching drama, color or dynamics. The numbers are, more or less, the aural equivalent of a yawn. Freeman saves the day by playing with an emotional intensity that Baker, who comes off like a rock pile, almost completely lacks. Baker's style, unadorned, direct, and sincere, made an enormous impression on listeners schooled in the pyrotechnics of bop. He had influential supporters in the jazz press. But, like a few other trumpet players, say Miles Davis or Art Farmer, I find it hard to understand just what his champions were thinking, at least to judge from these recordings.

So, if you're a Baker fan, you probably want to listen to these sessions for their historical value. He could play a lot of trumpet when he was in the mood and his chops were up. It's no wonder he sometime caught some East Coast players flat-footed when he decided to make a point. No irony intended, he just sounds drugged here, literally Valium- voiced. It's hard to resist the thought he was further into hard drugs by 1954 then we'd ordinarily think. And yet you also think of Bird's encomium, that young Baker would eat some players back East alive. What a waste of talent his career turned out to be. As for Baker's meteoric rise, that is for the cultural historians to explain.