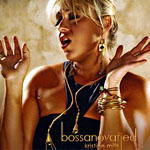 Brazil has a very special allure—not only for the Bacchanalian enjoyment of its Carnival in Rio, but for artists as well. Swinging musicians from all over North America have found the rhythmic seduction of the samba and the urbane swish and sway of bossa nova quite irresistible for decades. Lately, however, North American musicians appear to have discovered that seduction alone is not the prerequisite for making music in an authentic Brazilian idiom, even in the most popular one of all: the bossa nova.

Houston-born vocalist Kristine Mills is one of those North American musicians who has shown she can sashay with the best, with a moving record soaking in the spirit of Brazil's most popular urban export: bossa nova. The appropriately entitled Bossanovafied is a short yet beautiful collection of songs done in the rhythm of this urban mélange of jazz and samba, made internationally popular by Joao Gilberto, Vinicius de Moraes and Antonio Carlos Jobim. Mills and musicians like her appear to have also been influenced by a slew of other more contemporary musicians from Brazil's tropicalia movement.

Mills sings with child-like charm, recalling the guileless wonder of Blossom Dearie's annunciation and phrasing. Despite a flatter, slightly oblique attack, Mills' lyrical approach is to soak the words and phrases in the emotion of their poetry. Her sense of tone is sharp, and she can make subtle changes in inflection to alter the color of the song, with minute changes in breath or dallying over end-words or phrases to create just the effect she wants

"Sweet Sorrow" is a good example of Mills' vocal control. Turning poetry into music sometimes presents the risk that the words will lose their imagery to fit the music; Mills seems well aware of this and makes some pretty profound lyrics work with her well-crafted music. "Burned of Choice," "You Are" and "Fallin' in Love" are moving documents of lyrics and music melded with an alchemist's magic touch. But the true test of the record comes with its concluding song, "Inspiraçao," which oddly enough employs an all-American cast of musicians to turn Mills' poetry into song. The Brazilian crew that graces the seven other tracks is rather good and does not underplay its hand.

More credit must go to Mills, who is up to the challenge of exposing a Latin side to her soul. The only thing missing is Portuguese vocals, which would have made this project truly magical.

I Wish; That Was Yesterday; Sweet Sorrow; Sasha's Lullaby; Burden of Choice; Fallin' in Love; You Are; Inspira&#231ao.