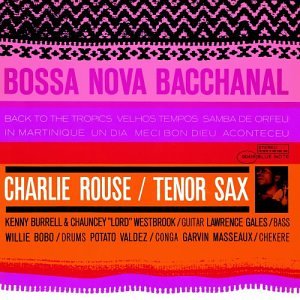 About eight or nine years ago, the major record labels finally realized that they could sell more copies of classic jazz CDs if they reissued them with the respect they deserved, including high-quality remastering and packaging. This has proved an unprecedented boon for the jazz fan; never have so many records by so many artists been readily available, even if the inventories are in cyberspace rather than in the attic of the corner shop.

However, there is a cloud to this silver lining. There are simply so many old albums in the reissue queue that some artists, particularly those who were more prolific as sidemen than as leaders, are underrepresented. And not just in quantity—sometimes whole stylistic forays are lost. A case in point is Charlie Rouse, the vastly underrated tenor man best known for his long tenure with Thelonious Monk in the late '50s and '60s.

The selection of tunes is perfect, too, with really only one bossa warhorse (“Samba de Orfeu”), several refreshingly lesser-known gems (the breezy “Aconteceu,” the ominous “Meci Bon Dieu”), and a Rouse original for good measure. Rouse does nothing to soften his sharp-edged, sinusoidal tone but lacks nothing in melodic invention, and his acerbic lines provide a citric zing where this kind of music is often too sticky sweet. The dual-guitar team is a real treat, providing excellent solos (both Westbrook and Burrell have their chance to shine) and a constant stereophonic percolation in the background.

A startling bonus track, however, threatens to steal the show, at least for Rouse fans—"One For Five," a non-bossa original from a later, 1965 session with (get this) Freddie Hubbard, McCoy Tyner, Bob Cranshaw, and Billy Higgins. The tune is reminiscent of something that might have fit on Wayne Shorter’s contemporary Blue Notes, and it features a nice Rouse solo different from his Monk guise, as well as fleet work by Hubbard and Tyner. How the rest of this session could remain in the vaults is beyond imagining, and only goes to prove the point made above. So please, Blue Note, put out the rest, and soon—but until then, thanks for the Brazilian appetizer.

Back to the Tropics; Aconteceu; Velhos Tempos; Samba de Orfeu; Un Dia; Meci Bon Dieu; In Martinique; One for Five