By ELLIOTT SIMON
February 5, 2008
Sign in to view read count 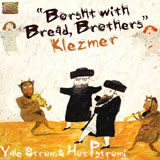 Based largely on his many visits to Eastern Europe, violinist Yale Strom paints pictures in his music, writings and films of a pre-WWII shtetl music scene where Gypsy (Rom) and Jewish musicians slipped in and out of each other's traveling bands. This porous musical culture resulted in many of the tunes on Hot Pstromi's Borsht with Bread, Brothers.

Hot Pstromi includes an interesting mix of jazz/world musicians like Klezmatics founding drummer David Licht, accordionist Peter Stan (Slavic Soul Party) and clarinetist/saxophonist Norbert Stachel (Tower of Power). Vocalist Elizabeth Schwartz displays a wonderful appreciation for the nuances inherent in this music. Her mastery of the ornamentations is superb on selections like the movingly ethereal Hungarian Jewish folk song "Szol a Kakas Mar (The Rooster Crows Already) and an extended version of the Czarist protest song "Vemen Veln Mir Dimen, Brider (Whom Shall We Serve Brothers?). She gives an inspired performance of "Ver es Keseyder Tseyln (Who Can Count in Order?) that wonderfully portrays the genre's cantorial and badkhen (wedding jester rhymer) underpinnings. Strom's fiddle, Stachel's clarinet and Stan's accordion likewise beautifully expose the emotional depth behind the melodies of what for the most part are simple folk tunes. Strom showcases his extensive knowledge in both song selection—from travels in the Ukraine, Slovakia, Belarus, Germany, Russia, Poland, Romania and Moldova—and the precisely written liner notes, where songs are skillfully described with lyrics presented in both Yiddish and English.