By GLENN ASTARITA
September 9, 2006
Sign in to view read count 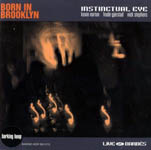 Frode Gjerstad (alto sax, clarinet) and Nick Stephens (bass) impart an improvisational Euro-jazz vista on this trio date, which was recorded in Brooklyn, New York. But the always multitasking percussionist/vibraphonist Kevin Norton balances out the vast temporal planes, while serving as a colorist and accelerator. Throughout the two lengthy works, the artists communicate a mood-evoking jamboree of emotive aspects through the power of intuition and razor-sharp execution. With an interleaving group-based mode of attack, the trio darts, scurries and jabs through moments of angst, whimsy and old-fashioned chutzpah.

On the 42-minute first piece, "Fitzcarraldo's Beautiful Nonsequitur, the musicians gradually raise the pitch, and Gjerstad seems comfortable improvising within the upper register of his sax. They frequently oscillate pitch and flows via intense dialogues and multi-timbral explorations.

Norton switch-hits from vibes to percussion during the entire session. He often counterbalances Stephens' creaky, bowed bass lines and Gjerstad's soaring choruses with softly generated vibes or accenting cymbal swashes. The trio plies an angular approach, yet occasionally veers off into hustling and bustling free-bop grooves.

In sum, this endeavor captures jazz-rooted improv within its purest component; a given storyline provides the initial forum for expansion. So, where others are apt to fail, this unit exceeds in rather glistening fashion.