By MARK CORROTO
November 18, 2013
Sign in to view read count 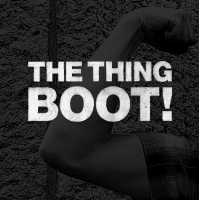 Somebody should inform the members of the Scandinavian free jazz trio The Thing they are not rock stars. I repeat, somebody tell saxophonist Mats Gustafsson, bassist Ingebrigt Håker Flaten and drummer Paal Nilssen-Love, you are not lizard kings.

The release of Boot!, their sixth studio album since forming in 1999, is a follow-up to the widely celebrated session The Cherry Thing (Smalltown Supersound, 2012) with Neneh Cherry. The band has also collaborated with the likes of Thurston Moore, Joe McPhee, Cato Salsa Experience, Otomo Yoshihide, Ken Vandermark, and Jim O'Rourke. Their garage band genesis was a tribute to the music of Don Cherry, but they quickly expanded into the a free jazz punk esthetic, covering music by The Stooges, Albert Ayler, PJ Harvey, Ornette Coleman, Led Zeppelin, The White Stripes, and James Blood Ulmer.

Boot! opens with an allegedly sacrilegious version of John Coltrane's "India" that becomes sacred. With Gustafsson blasting overblown notes from his baritone saxophone, the Indian Vedic chants and religious music Coltrane modeled his Indian drone sound from is infused with the electric of Håker Flaten's plugged-in bass and Nilssen-Love's drumming that is more Keith Moon than Elvin Jones. Trane's rapture is duplicated in a punk-garage euphoria.

Coltrane's music is also hinted at with the title track. The slow burn of "Boot!" finds tenor saxophone tracking the Håker Flaten's bass guitar, which is applied as more guitar than bass, to resemble "Psalm" from A Love Supreme (Impulse!, 1965). Elsewhere, they remake Duke Ellington's "Heaven" into a slow-burning ballad with a churning undertone of pounding drums and thunderous bass. "Red River" draws from the heavy blues rock of Black Sabbath, fusing rock and free jazz into a liberating energy of sound.

These three musicians are, to be sure, rock stars. Ones that can also make Duke and Coltrane smile.