Sonny Rollins: Meditating on a Riff 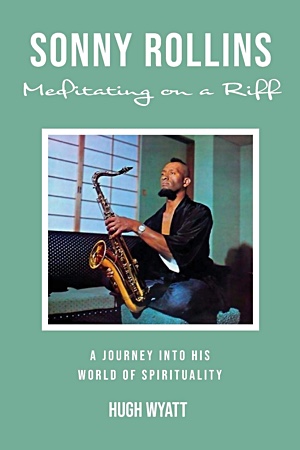 Author Hugh Wyatt doesn't hide his friendship with Sonny Rollins-Rollins is his daughter's godfather-he has written a spiritual biography of saxophone great Sonny Rollins which is perilously close to hagiography. He says in the intro that he doesn't want to avoid the dark incidents in Sonny's life and he doesn't. However, whether describing Rollins' involvement in heroin, his time in prison or his difficulties with women, Wyatt's framework and attitude for telling this history is Sonny-as-spiritual guru.

If this was just a question of "tone," of shading meaning, it would not be that important, but I am left with the feeling that he has not interviewed enough people and not given us a wide enough perspective toward Rollins. I say this not because I'm interested in a hatchet job on Rollins. Far from it—I'm a great admirer of his playing and listening to Rollins speak in videos over the last few years, I've heard a man who I think shows great wisdom. But the author promises us "A Journey into his world of spirituality" and more can be expected.

It's no easy matter to try and delineate the character of a man who grew up in the 1940s in a religious and political family on the tough streets of post-war Harlem. The winds blowing heroin into the lives of the jazz world were at gale force when Rollins started seriously playing in his late teens. Dope was ubiquitous and it seems like non-users were in the minority. Never having read a biography of Rollins, I was glad to get a sense of that late-1940's political and racial milieu and how easy it was for a jazz musician to run afoul of the law. Wyatt also fills in a lot about the various Muslim sects that were adopted by jazz musicians.

It was also interesting to hear how aggressive Rollins was-he was a feared boxer in the 'hood-and how this same fierceness manifested in jam sessions. Wyatt imputes an almost furious competitiveness to Rollins. More eyewitness testimony-including Rollins himself-would have been helpful to support this premise. While Rollins is quoted throughout the book, as Wyatt often tells us, he is a very private man and he doesn't like to talk about many areas of his life. Sometimes Rollins' quotes shed light and sometimes they are so general that they add little to our understanding.

Rollins' seminal spiritual moment, The Bridge, is covered well here. Rollins' two-year escape from the madness of the jazz life, practicing on the Manhattan Bridge, is the stuff of legend, as is his going to federal drug rehab in Lexington and quitting heroin. Interestingly, there are several allusions later in the book to Rollins again using, but no details are forthcoming.

Rollins' relationships to women were many and were complex. Rollins seems to have taken a fairly cavalier attitude toward women, but nary a disparaging word is heard from his ex-wives or girlfriends.

One interesting and important question taken up here is how and why jazz lost its black audience in the 1960's. Wyatt's notion is that, to some degree, the shift was economic-clubs were just too expensive-but mostly it was because jazz moved away from its roots in the black church. John Coltrane's turn toward the East was the key element, he believes. Rollins turned himself to what Wyatt says became part of "New Age" philosophy, but Rollins' use of Indian or other world motifs was less direct than Coltrane's. Wyatt's premise is difficult to sustain, as generations of jazz musicians continue to say how important the black church is in their lives.

Wyatt makes a great deal throughout the book about how important it was for Rollins to be the #1 tenor man. This goes from the very beginning of his career, choosing tenor so he wouldn't have to compete with Charlie Parker. I can understand this, but his ongoing narrative about Rollins' competitiveness is not backed up by statements from Rollins or by other musicians. Much is made of the rivalry between Rollins and John Coltrane. Wyatt alludes several times to their playing on the album Tenor Madness, which he describes as "embarrassing" for Coltrane; basically saying that Sonny whupped his ass. But there's something suspect about Wyatt's evaluation of Coltrane: "While Coltrane was a heroin addict during his creation of A Love Supreme and other 'sacred' recordings, his connection to the black Christian church was stronger than ever."

Coltrane was not an addict when he made A Love Supreme, his connection to the black Christian church was probably weaker than ever and putting 'sacred' in quotes betrays the author's negative attitude to what Coltrane trying to do.

Wyatt says several times that Coltrane dislodged Rollins from "the top of the heap." Wyatt writes "It is no exaggeration to say that, as a result of Coltrane's popularity bump, Sonny Rollins was running scared in the mid-60s." There are no quotes from Rollins or anyone else to back up the idea that Rollins allegedly felt this. Anything I've heard Rollins say about Coltrane was always how much he respected him and how well he thought of him as a person.

There's bit of the "you shall have no false idols before thee" quality about Wyatt when talking about Trane and Rollins; only room for one hero in his pantheon. This is consistent with the way Wyatt deals with the rough patches in Rollins' life. He tells you what happened, but always couches it in language reminding us how spiritually grounded Rollins was.

I don't think the book went through a rigorous editing process. Stories or points of information are often repeated several times throughout the book. Also, the chronological structure is very fragmented. Wyatt is not clear on when Sonny became "a certified junkie." I'm not sure when Sonny played piano, alto and tenor and I don't understand why relationships with certain women are talked about at certain times and not at others, well past the point in the book when the relevant time period is discussed.

There are other details about the music that jazz people might take issue with. Wyatt describes Post Bop or Hard Bop in one sentence as being "smoother " than bebop, then says "the once free-wheeling solos grew tighter and fiercer, bubbling with anger..." He says "bebop was largely a black jazz concoction (which) many whites found difficult to play" and singles out Stan Getz and especially, Zoot Sims as exceptions. I love Zoot, but it seems an odd choice.

Rollins was a seeker. There's no question about that. His family background was religious and he took an early interest in alternative spiritual and religious paths. He read widely, was a yoga and Advaita Vendanta practitioner, a Rosicrucian-at least to some extent-moved toward organic food later in life and clearly held a universalist, tolerant view of all approaches toward spiritual development.

Beyond this, Wyatt seems to believe in other occult powers accruing to Rollins. Can he really levitate? Rollins does have "an hypnotic effect on his audience," but Wyatt clearly implies more than a metaphor when he writes this. He describes Rollins' family seeing him filled with light. Rollins' most well-defined "occult" experience occurred in 2012, when he looked up and saw what he called a "veil." "The veil was covering this world. But what happened was that veil parted just a little bit...and behind it I saw this [vision], which was like a different world-some people would say heaven-or whatever." Clearly it was an important revelation for Rollins, but he soft-pedals experiences like this, while Wyatt chronicles them more like a true believer.

Hugh Wyatt has written an interesting history of Rollins' spiritual life, albeit more as an acolyte than as an objective chronicler. This shades some of the rest of the information that he gives us, making me wish a wider variety of voices were used to tell the story. Wyatt does fill in some lesser-known aspects of Rollins' life and gives the reader a vivid sense of the drug life and the religio-spiritual life of jazz, especially from the late 1940s to the 1960s. From "certified thug" to wise elder, Wyatt shows that it's been an epic trip for Mr. Rollins.