By FRIEDRICH KUNZMANN
July 15, 2019
Sign in to view read count 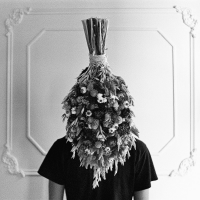 "If it is art, it is not for all, and if it is for all, it is not art." This opinion, from Arnold Schönberg, comes to mind when confronted with the first couple of minutes of New York-based guitarist Gregg Belisle-Chi's third outing as a leader. Structure and tonality are absent from the get-go. The careful accumulation of intervals presented on the opening track is more reminiscent of the unsettling effect of twelve tone music, the invention credited to Schönberg and the "Second Viennese School." This music is surely not for all, but some patience and examination reveals how much it could be for some. Originally based on the concept of a five movement suite in the spirit of the latin mass ordinary, Book of Hours is an ambitious and accomplished work.

The second track, "Kyrie," is simpler than the first. Heavy snare blasts accompany straightforward guitar playing. The alternation of deconstructed interludes and melodicism continues throughout the well-paced record. Bendy guitar work combined with a simply executed rhythm section on "Gloria" recalls Bill Frisell, whose influence on Chi can be traced across many sections of the record. A couple of minutes later, however, Wurlitzer-led craziness disrupts the laid-back groove and opens the gates to a whole different jam in which Chi switches on his more experimental array of guitar pedals to frantic effect.

Atmospheric approaches to guitar music often combine a few chords and a bunch of sound manipulations, allowing the musician to noodle away in a wishy-washy pool of sound. Chi and his band can't be accused of this. Echo and reverb are added to serve the respective note or chord and not the other way around. This mindfulness for subtle details can be felt in the quieter moments on the record, in which the effect of slight harmonic shifts is greatly elevated by thoughtful sound manipulations.

Book of Hours confirms Chi as a mature and dextrous guitarist, and also as a composer who likes to dig deep into the material at hand as much as let the mood of the music guide his hands.