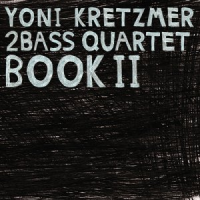 One of the major innovations of the 1960s New Thing was to liberate the so called rhythm section from time keeping duties. The role of the bass in particular was transformed, allowing it leeway to sit alongside the front line. But there was still sometimes a need to impart momentum. One solution was to double up, a gambit first utilized in Ornette Coleman's Free Jazz (Atlantic, 1960), but then elsewhere such as John Coltrane's sessions for Africa/Brass (Impulse!, 1961) and in Cecil Taylor's 1966 brace for Blue Note. Since then the tactic has become, if not commonplace, then certainly familiar, but few exploit it as successfully as NYC-based Israeli saxophonist Yoni Kretzmer.

This double disc set constitutes the second outing for his Two Bass Quartet, featuring Reuben Radding (in the left channel) and Sean Conly (in the right) on the titular instruments, with drummer Mike Pride fanning the flames. Kretzmer studied with two fiery tenor players in Ellery Eskelin and Assif Tsahar and the lessons learned manifest in a personal and uncompromising approach. Kretzmer cultivates a frayed diction, replete with overtones, harmonics and distortions. He reiterates and worries at phrases with carefully controlled overblowing, yet he also possesses a romantic streak most apparent in the ballads, but which also pervades other tunes.

ADVERTISEMENT
Of the two basses, Radding more often wields the bow, while Conly hews to pizzicato, but both excel regardless of technique. One of the pleasures of the set stems from the fervent interaction among the foursome, not only between the inventive twin basses, but also between the leader and each of the other members. Radding's bowing forms incendiary counterpoint to Kretzmer's aching dirge on "Haden," an inspired opener which namechecks one of Ornette's chief collaborators. Radding repeats the trick in the excellent "Stick Tune," where he shadows the leader's squalling tenor. Not to be outdone, Conly enjoys an extended solo later in the same track stuffed with bent notes and speech like inflections.

As a composer Kretzmer provides just enough material to guide each piece to a winning realization, often combining free jazz skronk and attractive lyrical passages. Trumpeter Bill Dixon's similarly formulated quartets perhaps coming closest in terms of the prevailing, often dark, moods. "Metals," another highlight, starts with whale song call and response between the basses, surging into a rippling oceanic swell, before moving into gruff tenor and an exciting staccato interplay with Pride's drums. Throughout Pride shades, colors and punctuates with an attention to detail which results in an unpredictable but satisfying whole. He features again on the near 20' multi-sectioned "Number 4" which comprises the whole of the second CD and reminds as a summation of the band's considerable breadth and depth.