By DAN BILAWSKY
February 9, 2011
Sign in to view read count 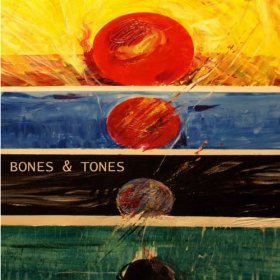 Percussion might very well be the oldest form of communication known to man, but practitioners of the percussive arts are often relegated to supporting roles in the majority of today's music. When percussionist Lloyd Haber received an invitation to form a group for the 2009 Long Beach Jazz Festival, he fought this notion and put together Bones & Tones, which places percussion right at the center of the action. Using marimba and vibraphone as the lead voices, Haber formed a percussion-plus-bass quartet that's more "world music" than "jazz," though designations are of less importance than the music itself.

Max Roach's M'Boom might be the closest reference point, but Bones & Tones occupies its own niche in the percussion ensemble pantheon. The majority of the pieces on their debut album are built on ostinato patterns established by one or more instruments, allowing a single melodic voice to sing and improvise on top. While much of the music has strong African underpinnings, a pan-global approach brings a variety of cultures together in certain places. Abdou Mboup's kora playing hints at Asian influences during "Breathing Water," but the instrument returns to its West African origins during "In The Valley Of Dreams." A touch of tropicalia even comes into play on "Carajillo Con Mantilla," which benefits from an infectiously deep groove—courtesy of Mboup and bassist Jaribu Shahid—and some fine solo work from vibraphonist Warren Smith and Haber—on marimba.

While odd metered, trance-inducing patterns of a tribal nature serve as the basic setting for most of this music, Smith's "228" is a notable exception. This composition is a musical montage that works its way through frantic percussive forays, dreamy vibraphone melodies, and a whole lot more during its nearly nine minute lifespan. With a collective resume that touches on everything from Harry Partch, Aretha Franklin, Sam Rivers and Bill Laswell to Don Cherry, Ornette Coleman, Martha Reeves and The Sun Ra Arkestra, it's safe to say that these four musicians have seen it all, and this breadth and depth of experience helps bring new life to the under-explored jazz-world music percussion ensemble format utilized to great effect on Bones & Tones.

Breathing Water; 228; Dance For Suwoo; Configuration; Song For The Old Ones; Carajillo Con Mantilla; MR7; In The Valley Of Dreams.