The Hot Club of San Francisco: Bohemian Maestro: Django Reinhardt and the Impressionists 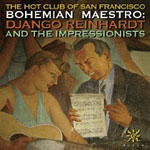 This could be the most ingenious tribute I've ever heard: it's not just the music of a much-loved legend, but the sounds that surrounded and inspired him as well. In this case the legend is Django Reinhardt, and the tribute-makers are the reliably terrific Hot Club of San Francisco [HCSF] and their classy classical guests: pianist/conductor Jeffrey Kahane, on three tracks, and the all-female, all-woodwind Aeros Quintet, on two.

Bohemian Maestro offers a generous buffet of 16 songs, including some by Claude Debussy, Francis Poulenc, Heitor Villa-Lobos, and Ferdinand "Jelly Roll" Morton; a taste of jaunty Parisian street music; notable originals by HCSF leader Paul Mehling and violinist Evan Price, and seven lesser-known Reinhardt compositions, including his own "Bolero." The works of Reinhardt's contemporaries are arranged in his style, a brilliant device which gives the listener a virtual window into how he heard and likely performed the music of his time (he lived from 1910 to 1953). Finally, the thoughtful, often witty track descriptions place Django's music in context, while the choice of selections underlines its unique and timeless appeal; as Mehling puts it, gypsy music is "hot, mysterious, emotional and romantic."

There are many delights on this tenth release from the HCSF. On Reinhardt's rollicking "Vendredi 13," the striding of Kahane's piano adds an unusual counterweight to the guitars and violin while paying tribute to Maurice Ravel, who was known to sit in with the guitarist and his crew. It's also impossible to resist Price's merry little "Le Jongleur" or Jelly Roll's "The Pearls," where Mehling plays Reinhardt's original instrument: the banjo. As the notes suggest, "We somehow felt that Django must have been exposed to the piano stylings and polyphonic arrangements of Jelly Roll Morton and his Red Hot Peppers. There's no way to avoid it: hot music seeks its own." This philosophy underpins this CD, although there are many moody and atmospheric moments as well. The woodwinds enrich "Nympheas"—perhaps " Reinhardt's sonic impression of Monet's 'Water Lilies'"—and then join the HCSF in performing "Messe," Reinhardt's forgotten masterpiece. This was the Overture he wrote for a Catholic mass to honor the Romany people; its score was lost until an organ recording was found, which Price transcribed and arranged for his group and the woodwinds. It's a stunning piece of music, and a facet of Reinhardt that may surprise many of his fans.

Bohemian Maestro provides invaluable insight into an especially lively and creative time in Paris, bringing us deep into the heart of it. The kaleidoscopic selections are woven together so seamlessly that CD nearly feels through-composed, while still fulfilling a primary goal of this group: the production of "spontaneous joy." It's rare for joy to be this educational, but then the Hot Club of San Franciscois an unusually brilliant group.

About Hot Club of San Francisco