This concert offered a stimulating blast of music from the outer stratosphere of modern jazz, performed by cutting-edge musicians who are among a handful who can truly make it happen. It consisted of two original compositions: the first, by Bobby Zankel, was entitled "Ndura: The Forest is Our Father and Mother"; the second, entitled "Dasha," was a much longer piece commissioned by the Philadelphia Music Project for the highly-regarded Rudresh Mahanthappa, who also served as guest soloist on alto saxophone. 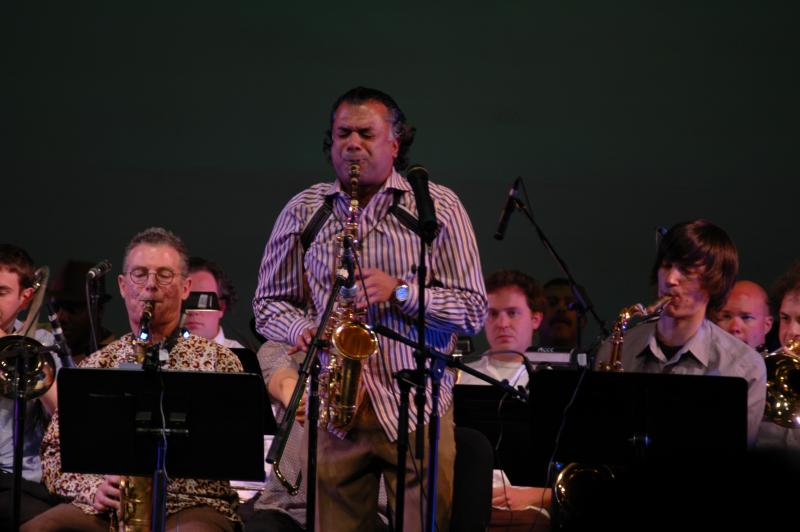 Rudresh with Zankel (seated, on left)

The reviewer's experience with this music was similar to his first listen to John Coltrane's avant- garde loosely-structured composition, Meditations (GRP, 1966), a recording that came in the wake of the seminal giant's A Love Supreme (Impulse!, 1964) and incorporated the tenor saxophone of Pharoah Sanders with that of the leader. Initially, all he heard was a cacophony of wild sounds. But when he listened more carefully, its inherent beauty became more apparent. When Coltrane premiered it in New York in the 1960s, half the audience walked out, no doubt disappointed he didn't do "My Favorite Things" and his other signature pieces. The audience for the Warriors concert at Montgomery County Community College was much more respectful, appearing to enjoy the performance thoroughly. Whether the two very different responses reflected the historical times (performances separated by nearly a half century) or the audience' increased tolerance for musical challenges may necessarily remain an open question.

It's not that such music is hard to hear: by now most of us are familiar with dissonance and accept it. It's that so much is going on all at once and so rapidly that the "normal" brain gets rattled trying to keep track of it all. Yet, in this case, the extra demand placed upon the listener was well worth the effort. The musicianship was consummate, and there were gems of improvisation, highlighted by melodic interludes the likes of which are rarely if ever heard, along with brilliant turns of phrase and moments of deep, meaningful expression.

Rudresh Mahanthappa is himself a phenomenon. A brilliant instrumentalist and composer who integrates modern jazz with the eclectic music of the India of his parentage, he carries credentials that all but speak for themselves: Guggenheim fellow, 2009 Downbeat International Critics Poll Winner ("Rising Star- Jazz Artist" and "Rising Star-Alto Saxophone"), and Alto Saxophonist of the Year for 2009 as selected by the Jazz Journalist Association. But while these qualifications appropriately acknowledge his genius, to hear him play is simply an unforgettable experience. He follows the revered traditions of Coltrane and other ground- breakers, but his technique, like his influential predecessors,' resists comparisons, and he weaves line after line of transcendent beauty. 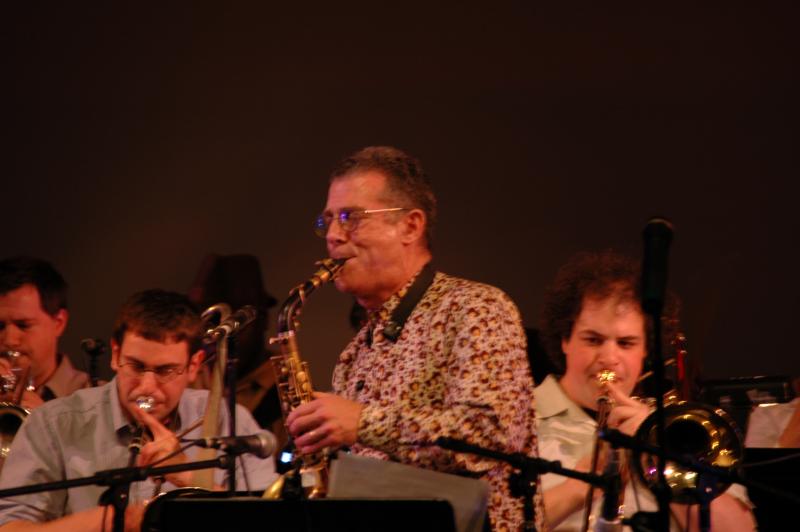 The first of the two pieces to be performed "Ndura," by Zankel (pictured above), was a breathtaking composition evocative of the untrammeled forests of our ancestors. Zankel explained it to this reviewer as follows: "Ndura is the name of the Ituri forest in the KiBara language of the BMbuti (pygmy). The forest is their whole world and gives them everything that they need, so this piece celebrates the interconnectedness of man and his environment." The work alternated between rich ensemble playing and interludes of quieter solos and reduced instrumentation, providing a sense of pause and reflection in the midst of the primal energy of unstoppable Nature. The Warriors executed complex counterpoints crossing the border between composed music and improvisation. Their clear sonorities and precise movement would flatter any symphony orchestra. And the ensemble clearly demonstrated the appropriateness of their elemental, heroically aggressive name: despite the standard instrumentation, they are no ordinary "dance band." One has to go back to Woody Herman's explosive "Thundering Herd" to find a band this forceful, electric and resilient.

In the relaxed mood of a poised and gentle giant, Mahanthappa explained his extended theme and variations, "Dasha," as a derivative of a favorite childhood version of the story of a Hindu god, wielding a favorite comic book from his own youth as the inspiration for the music. Pianist Tom Lawton later told me that the movements were listed on the score as simply: #1, Dasha, #2.5, #3, Drums, Saxophones, Flute, Out, and Finale. The entire piece exudes energy that challenges the musicians' ability to keep up with it, which they did quite admirably. Mahanthappa's soloing displayed diaphragmatic power and flawless rapidity, but he was careful not to dominate or overshadow the other musicians, allowing for fine solos by Brian Rogers on trumpet, Larry Toft and Joe McDonough on trombone, Brian Rogers and Zankel himself on alto sax, and other band members as well. Most amazing were the flute solos of Elliot Levin, who sat off to the side near the piano, not only contributing some brilliantly original "choruses" but, in one segment, singing a melodic line underneath his own flute playing. 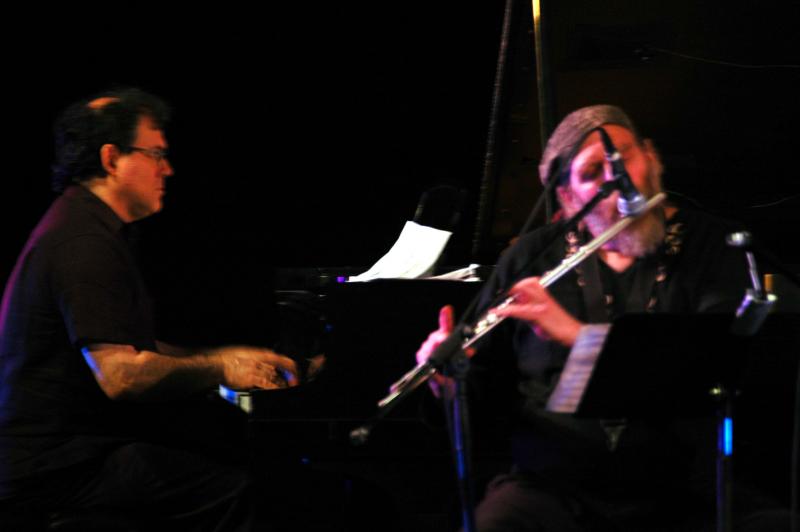 In the true spirit of "world music," Mahanthappa's playing and composing interweaves the American jazz idiom with Indian raga and popular music into a seamless fabric of high-energy sounds. Indian music contains notes that are not to be found in the Western diatonic scale, and jazz, with its blue notes, "bends" the diatonic scale but in a different way. Somehow, Mahanthappa fuses the music of the two cultures in a manner that makes perfect aesthetic sense. This can only occur in the context of modal rather than harmonic playing, an approach that Miles Davis introduced in the ground-breaking album Kind of Blue (Columbia, 1959) and which has since gone off in multiple directions, including polyrhythmic and polytonal manifestations that Mahanthappa appears to love to exploit to the fullest extent. The future of jazz lies very likely in the sort of multicultural influences of which Mahanthappa's work is exemplary.

The first meeting of Mahanthappa and Zankel took place at the former's performance at Philadelphia's famed "Painted Bride" and must have resembled the famous understated encounter of Livingstone and Stanley near Lake Tanganyika in Africa: "Dr. Livingstone, I presume?" The two musicians are kindred spirits almost pre- destined to meet up and work together. In this concert, both showed an interest in mythological inspirations and complex forms, a shared curiosity which makes for profound collaboration.


Visit Rudresh Mahanthappa on the web.