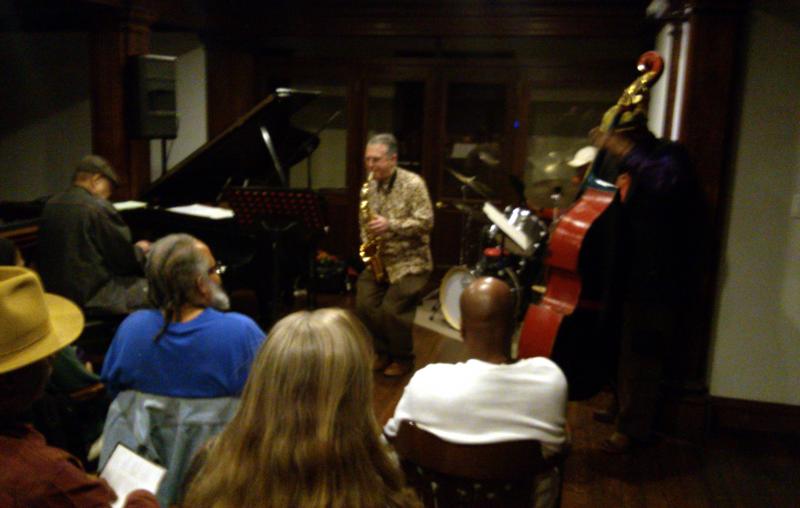 When you bring together four of the most passionate avant-garde jazz musicians, something interesting is bound to occur. In this concert, the musicians were not only top shelf but, in addition, they were superbly well-matched and the planets were all in the right configuration for magic to happen. Most importantly, the personnel assembled for the occasion—saxophonist Bobby Zankel, pianist Dave Burrell, bassist William Parker, and drummer Andrew Cyrille -have performed extensively with one another, and shared in common the strong influence of Cecil Taylor and other innovators of a similar ilk. So, even though they were not a working group as such, they were very much in synch with one another. Then, too, the setting was intimate, allowing for the warm, natural sounds of the instruments to be appreciated. Moreover, Burrell's 75th birthday added a celebratory note. An expectant and enthusiastic audience jammed into the salon room of the Philadelphia Art Alliance, and tap-dancer/ choreographer Germaine Ingram, who has worked on dramatizations employing Zankel's music, provided a heartfelt and knowledgeable introduction of the musicians. The audience was primed for something special to happen, and it did.

What they got was an energetic yet disciplined performance of music which, while in many people's minds would be considered well beyond the mainstream, contained enough traditional elements to be accessible and compelling to almost any listener. In addition, the remarkable virtuosity of the players, pushing the limits of their instruments and stretching the harmonic and rhythmic vocabulary, was always in the service of delivering meaningful and propulsive musical experiences, never devolving into displays of technique or incomprehensible stretches of the imagination.

The group began with John Coltrane's timeless ballad, "Naima," taken at an elephantine pace that allowed every bar and phrase to be fully exploited. The music contained more than hints of Miles Davis' Kind of Blue and Coltrane's A Love Supreme albums as recurrent motifs, adhering to the tonal centers and the blues idiom, keeping the music well within the tradition. Influenced by Cecil Taylor's dense and percussive piano style, Burrell provided touches of stride and ragtime within a clustery mix of rhythms which led up a to a steamy, thunderous climax and a brilliant drum solo by Cyrille beginning with the cymbals, surprisingly creating almost supersonic sounds, then going to the snares and tom-tom's, and finally down to the bass drum, in a descent from the stars to the sky to earth. Zankel's alto saxophone solos contained many quotes and references to Trane, and his closing chorus possessed extraordinary lyricism.

Next, a too little known composition entitled "Black Robert," composed by Burrell and his wife, the poet Monika Larsson, provided a parody of a mambo that had strong and at times humorous, lumbering momentum. The group passed around solo opportunities to one another, eventuating in an especially interesting duo by Parker and Cyrille in which they elaborated on the rhythmic twists provided by the tune.

The accumulating, seemingly boundless energy built up still further with Zankel's "Anthem for Ancestors." The rhythm section generated an ecstatic African tribal feeling in which Zankel in particular let out all the stops, achieving a spiritual frenzy akin to what occurs in Coltrane's Meditations. Then, everything quieted down as if at the end of orgasm, and Burrell delivered an interlude in the mode of Bill Evans. But, as if feeling constrained by the impressionist solipsism, the group released into an explosive, rebellious fireworks of freedom.

Then, as if to prevent episodes of cardiac arrest, an extemporaneous "Drum Solo" by Cyrille provided a stabilizing "beta-blocker" of variations around a regulated recurrent rhythmic pattern. Here, Cyrille gave what could have been a mere musical exercise an organic, existential quality that made it a mini work of art and the sign of a true master.

The set concluded with Burrell's recently composed ballad, "Teardrops for Jimmy," dedicated to the late bassist Jimmy Garrison. The piece opened with a duo by Burrell and Zankel developing the melody and harmonic base, but which, with the help of Parker and Cyrille, escalated into fast paced polyrhythms and what could only be called "off- rhythms" that seemed to come from another universe, building to sustained, excruciating intensity which eventually quieted down as if it had exhausted itself.

For an encore, the group performed another Burrell/Larsson composition, "The Other Side of Midnight," which began with a contrapuntal duo by Zankel and Burrell which evolved into a fast-pasted and powerfully driven polyrthymic "cloud" of sounds.

Thus, what could have become a rebellious uprising of the avant garde turned out in fact to be a five-star concert which had the spark, energy, and creativity heard in the 1960s at places like New York's iconic Five Spot. Or, as a guy from the boondocks, who was accustomed to hearing music by pickup bands at rural hangouts, said on his first visit to Birdland, it was "the real thing."