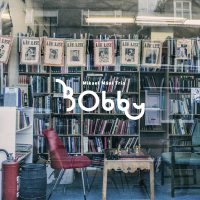 Held in Iceland, the politically charged bout took place against the backdrop of the cold war and garnered worldwide attention. Less well known is the subsequent close relationship between Iceland and Fischer, whose life became one of personal and political controversy, leading to his eventual residence in Iceland, which harbored him until his death. Mani's work is not directly focused on the politics of these events, but instead presents a meditation on the themes evoked by the narrative of Fischer's complicated life and struggles.

Knowledge of Fischer is not necessary to appreciate Mani's dexterous touch and compositions. Featuring fellow Icelanders, bassist Skuli Sverrisson and drummer Magnús Trygvason Eliassen, Bobby establishes a ruminative atmosphere throughout its ten pieces. Mani employs a studied technique and a predilection for subtle surprises that emerge like well-laid traps from within the pieces' extended lines. Whether constituting a sudden descent into dissonance, a brief eruption of distortion added to his otherwise open tone, or journey into abstract soundscapes, these moments never feel jarring despite their unexpectedness. Instead, they help provide depth and layering.

This quality stems from Mani's meticulous style, kindred to Jim Hall's in tone and inflection, while also encompassing the Django Reinhardt school of rhythmic progression, as well as traces of Lage Lund and other contemporaries who have chosen more spacious and minimalist approaches.

A solid debut, Bobby establishes Mani as a thoughtful, deft musician ready to add his voice to the roster of Scandinavians who continue to sculpt a distinctive jazz sound.

Board Games; Sol; Reykjavik 1972; First Impressions; Lend Me Your Finger and I’ll Take Your Whole Arm; Wishing You Were Wrong; Betrayal of an Insecure Soul; Bobby; Tie Your Hopes Down; Down in the Well.