Bobby Broom: Swept Away by the Music

By CICILY JANUS
September 9, 2009
Sign in to view read count

When I hear music I want to feel like I did early on where I was captivated and taken away.

Bobby Broom is a veteran jazz guitarist, originally from New York City and currently operating from the Chicago jazz scene. He's been the staple side dish of soul and jazz for over thirteen years at Pete Miller's Steakhouse in Evanston, IL. He's also busy performing regularly—not only Chi-town, but throughout the world with his own groups, the Bobby Broom Trio and the Deep Blue Organ Trio, and with saxophone icon Sonny Rollins. But Plays for Monk (Origin, 2009) is a true standout among his many accolades. Alongside bassist Dennis Carroll and drummer Kobie Watkins, Broom displays a craft that is based in rich character, deep grooves and the true spirit of this music.

Although guitar was never featured on Thelonious Monk's recordings, Broom's sheer love of his music and personable approach make this a recording for any Monk or Bobby Broom fan. Broom's choice of repertoire is intriguing, as it isn't material traditionally covered from Monk's book.

All About Jazz: Tell me about your newest recording, Plays for Monk. What fueled your decision to put out a tribute CD, when there are already so many out there?

Bobby Broom: In a broad sense I think this is a tribute to one of the greatest figures in jazz. We're dealing with his musicianship and his musical personality, his persona and image... Monk's got the whole package. He was one of the greatest iconic figures in this music. When I think about the jazz image, he's one of the guys that come to mind. I think of Miles Davis and Sonny, John Coltrane, Ornette Coleman, etc. I think of people with personalities that pan out to their music and Monk is the thread.

Also, his contributions, both compositionally and as a soloist, were so different yet so immediate for his time. These are things that are very striking and lasting for all of us. Earlier on, I had thought about doing a solo guitar record of all Monk tunes but that seemed too odd and hefty an endeavor, and was not what I needed to be doing. I'm trying to develop myself and this group to get more recognition and visibility, and that wasn't going to be the way to go about it. In thinking about his music further I began to realize that I needed to do a Monk record with tunes that suit me and what he represents to me. This way I could represent my vision of him to listeners. It was quite a process to find tunes that were the right fit, not to mention I was keeping my group in mind and how we sound and go about our music.

AAJ: Once you finally decided on doing a Monk tribute, what was your process of going from idea to recording?

BB: I immersed myself in his music and tried to pick the right things for me. I picked a couple of tunes that he didn't write but that I associated with him, especially "Lulu's Back in Town." I wasn't one hundred percent sure about the idea of doing his music, even up to the day of the first rehearsal. I was having second thoughts about whether it was too contrived an idea, or whether it was going to come across right. They were just ideas, at the time, about possibilities. I kept second-guessing myself until the first rehearsal. Once that was over I realized these decisions were fine and we began to embrace the music, eventually making it sound like us. 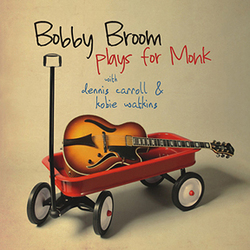 AAJ: How does the dynamic of your group differ onstage in your regular gig than it does when you're in a studio?

BB: The studio is obviously a controlled environment and the stage is not. You have to take what you get in the live environment, and often, success requires a certain amount of familiarity. You have to be familiar with the people you're playing with and hopefully the chemistry and synchronicity come together. With that simpatico going on you can work well together.

Having recorded this music as a group, when we get together live, we know how we want it to sound and what we have to do to recreate that feeling. I guess it's not necessarily recreating it but living up to that recording in a live performance and feeling good about what it is we're doing. We got good results in the studio for this record. We felt comfortable and most of the tracks are first or second takes. This time around being in the studio was a relaxed and relatively leisurely environment. That's not always the case, but we were fortunate and as a result it was fairly easy to produce results that we were happy with.

AAJ: Ideally, if you could reach out to your listeners with this music, what is it that you want them to hear?

BB: I want them to hear the feelings I have inside, that's what this music is about for me. I want them to hear it and know it's me. This is hopefully happening more and more when people listen to me. I'm going to keep working to try to fulfill that. I guess we all want to have a sound that's recognizable. We all have this, but a large part of this is producing enough of a body of work, and making that work interesting enough to keep people's attention over a period of time. It's not easy to do this, but this is what I try for.

AAJ: Do you think jazz magazines and critics help or hurt the scene, especially when it comes to getting new names in print or heard by others?

BB: I don't pretend to know how this end of the business actually works. I'm not sure what comes first, the chicken or the egg, the talent or the recognition, in terms of how somebody's success is mapped out. But, I do know that there are certain segments of this business that have to be accounted for and dealt with. The media, getting airplay, etc.; and the fact that, if you want to work live, you almost always have to have an agent. I don't think it's necessarily magazines' or critics' fault that we have to play by these rules. But I'm sure we all wonder sometimes how talent falls into the equation as far as who gets recognized and who doesn't.

I've had a live gig for thirteen years and we made a live recording from that venue that received a fair amount of notice. I know that that gig has gone unnoticed for a long time by many area jazz journalists; I have to think—or hope—that it's not their fault. I guess it has to be a combination of everything working for me to have them know or care about what I'm doing. But it seems that the people who are known enter a revolving door of a certain favored group. It's a limited scope. When I was a young musician trying to figure out what was what and who was who, I thought some of these sources were very good but I still only paid attention to what and who I was interested in. I didn't let magazines dictate everything I thought. I even had to disregard some things. I guess that was good on my part, as a kid, to be able to do that and not take everything that was printed as law.

AAJ: What is it about this music that draws you in to keep going through even the tough times?

BB: As a young teenager, I was attracted by the jazz spirit. There was something coming from those records I listened to—a feeling—that kept me coming back on a daily basis. I wanted to be one of these guys but I felt that surely, I'd missed the opportunity. I was born thirty years too late. When the magic started to happen in the opportunities to play with guys like Al Haig and Walter Bishop, Jr., Jr., Sonny, Art Blakey, it fueled my fire, because I never let my feelings of doubt deter me from practicing and pursuing my burning desire to play jazz music.

There's something that captivates me in a beautiful melody, or in a performance of one that's undeniably powerful I wonder if we tend to forget about these simple, universal characteristics in this day and age. I feel that this is missing in a lot of the music that's currently happening. Of course this isn't missing in all of it, and I'm thrilled to hear something that's modern and has these qualities.

I'm a music lover, really, a music fan and a listener. When I hear music I want to feel like I did early on, when I was captivated and taken away. I want to be engaged. I don't want to have a figure out a whole lot, that's not what music is for me. It's not math. I didn't enter music thinking that way, but at some point, during my pursuit to be a jazz musician, I got into that mindset of rigorous study. Everything I heard I was thinking and analyzing and asking every question in the book. Of course we all do this as students. But for me, it had to end. I'm forty-eight years old and I've found my way back to what I like and I'm satisfied with that.

I know this isn't the end of what I'm going to do but the wild search has got to end. I have to find a way to make this a more peaceful journey. Part of this entails the realization that there's always going to be something new and different on the scene. There's always going to be somebody younger and older; seasoned and less seasoned. It's ever-changing, as far as my perspective is concerned. But, what doesn't change is the great feeling that existed in Louis Armstrong, that has gone through and remains a part of every great jazz musician I've heard.