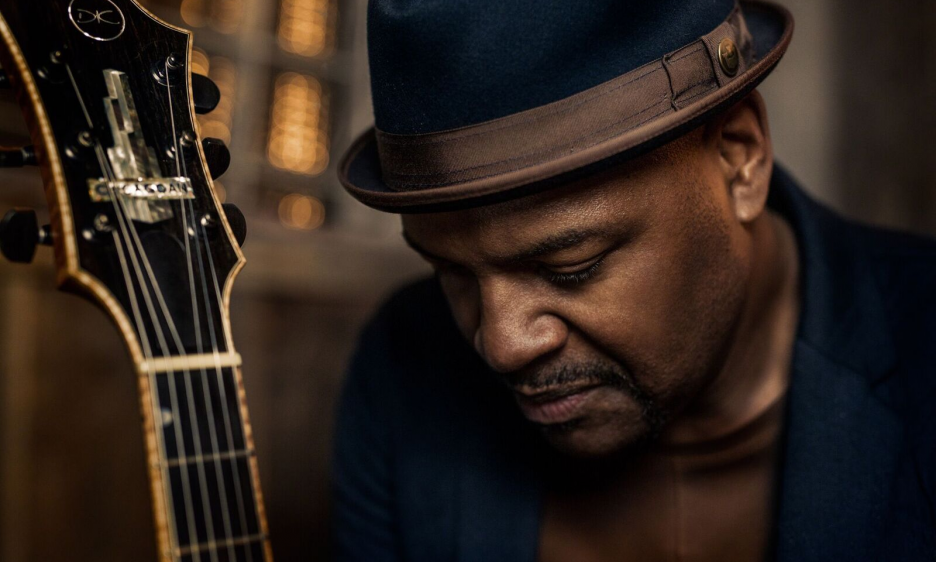 The approach I have taken on this record has become a bit of an anomaly these days. This effort may be the boldest statement I’ve ever made.
&#151Bobby Broom

What would your sensibilities say if an established jazz guitarist, supported by organ and drums, reinterpreted Seals and Crofts' "Summer Breeze," the Beatles' "Come Together," and Steely Dan's "Do It Again"?

Perhaps you have heard this guitarist before with Sonny Rollins or Stanley Turrentine; maybe you heard the album where his guitar-acoustic bass-drums trio performed all Monk tunes. And now you see him leading the Organi-Sation, featuring organist Ben Paterson and drummer Kobie Watkins This ensemble's debut recording, Soul Fingers (on Megaforce Records), includes the three songs mentioned above, along with David Gates' "The Guitar Man" and Bobbie Gentry's "Ode to Billie Joe."

Does anybody have any questions?

Well, Bobby Broom the guitarist being discussed, thought out loud about what he has done and asked, "Couldn't it be risky to present (this record) this way? This used to be the norm, but it seems that jazz has moved away from this model," he said, during a recent conversation at Andy's Jazz Club in Chicago. "The approach I have taken on this record has become a bit of an anomaly these days. This effort may be the boldest statement I've ever made.

"The songs on this recording are great tunes," Broom continued. "These are tunes I could wrap my guitar strings around, in terms of playing and singing the melody on the guitar. This recording is very free in terms of seamlessness between the grooves and the feelings of the music."

Every track on Soul Fingers, Broom said, presents multiple moods. Beyond the guitar-organ-drums core is a constantly changing backdrop featuring strings, horns, acoustic guitars, vibraphone, and percussion. "Come Together," the first cut, "has the energy, the vibe of the music, the vibe of the record. There are no additives; it's just the trio. It's groovin' hard and kind of dancey."

Playing this song, Kobie Watkinsadded, brought back some way-cool memories.

"It took me back to some of the YouTube videos I have watched of Mitch Mitchell (drummer in the Jimi Hendrix Experience) and some concerts from the '70s where the bass drum was open in the back," Watkins said, during a phone interview from North Carolina. "Those grooves were really profound."

On George Harrison's "While My Guitar Gently Weeps," the ensemble is joined by Sergio Pires and Luciano Antonio two acoustic guitarists from Brazil.

"Segio and I used to play this brunch. He would sing and play standards, and I would solo. He always played great rhythm," Broom said. "Sergio recommended Luciano (for the recording), and we wound up using both together, because it felt good and made sense."

Broom's reinterpretations, Ben Paterson noted, contain natural parts that, depending on the moment, may swing or may be funky. "With Bobby's unique time, feel, sense of harmony and mastering of the jazz language," Paterson said via phone from New York, "he's really able to deal with these classic tunes in a fresh way. He brings a really deep and modern jazz sensibility and approach to these tunes."

"Eyes of Faith," a Broom original, is enhanced with a string section arranged by Matt Jones Broom noted that its structure is similar to a pop song.

"I play the melody, which goes through the form of the song," he explained. "And just like a singer who vamps at the end of a tune, that's when I take my solo. That's how I treat some of the music, like I'm almost a singer."

To manage all the textures present on Soul Fingers, Broom asked Steve Jordan to serve as producer. Jordan—a multi-instrumentalist whose performing and production credits include Robert Cray, James Taylor, Patti Austin and about a thousand more cats—also played drums on two tunes. Learning from Jordan proved enlightening for Watkins in ways he had not imagined.

"He talked about drum-set playing from that chair; he talked about guitar playing from the guitarist's side, and it was all amazing," Watkins said. "He changed how I thought about playing when I go into the studio. I want to approach it now where I am aware of everything that's happening."

The Organi-Sation's first recording and live performances—most recently a record-release party at Space in Evanston, Illinois on October 5—display an ever-expanding reach that Paterson finds challenging and invigorating.

"Bobby and I are able to sit on top of the feel that Kobie creates and go in so many directions," he said. "A lot of drummers want to fit in one camp, but Kobie has the ability to swing and play funky backbeats at the same time. I don't know how he does it!"

Before forming the Organi-Sation in 2014, Broom played with organist Chris Foreman and drummer Greg Rockingham in the Deep Blue Organ Trio for twenty years. (This group, which disbanded in 2013, recorded four albums and also opened for Steely Dan in its final year.)

"I never thought I would have another group, particularly an organ group, that would have the chemistry Deep Blue had," Broom said. "But I was pleasantly surprised. After the Organi-Sation got going (as a quickly-arranged opening act for Steely Dan after Deep Blue dissolved), there was a natural chemistry and natural fit. I want to be able to play in a freewheeling way, and these guys are perfect for that. Our groove is strong and deep."