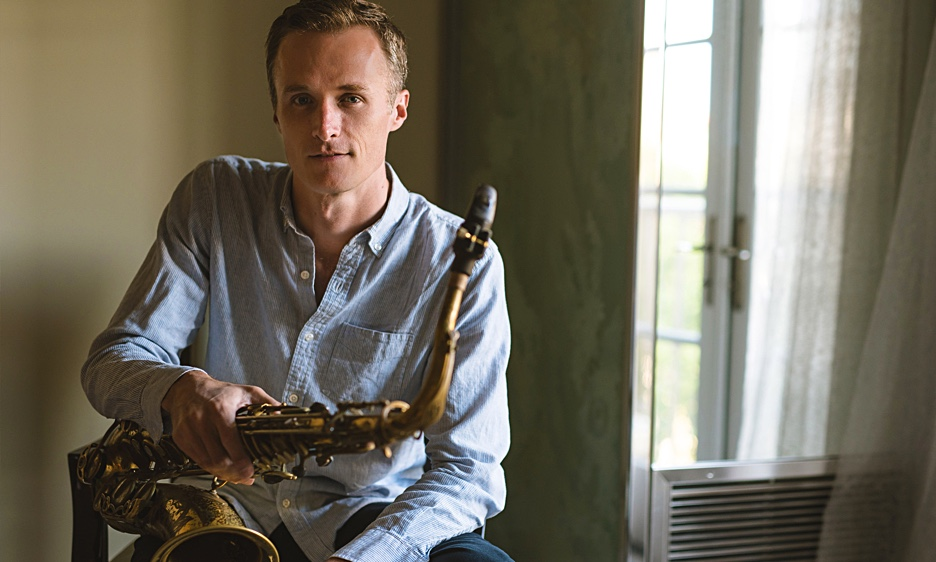 I am a jazz musician. It's just that—what does that term mean? &#151Bob Reynolds

Bob Reynolds, a saxophonist and composer of note with nine recordings under his own name and a work load that has him playing with artists like Larry Carlton, Snarky Puppy, Josh Groban, John Mayer and others, pauses when considering the genre of jazz and how he fits in.

Reynolds doesn't have to apply his talents to the changes of jazz standards or neo-bop workouts written by his peers to be fulfilled. He can do it. It can be fun for him. But his rich tone, silky chops and great feel for melody and rhythm don't have to be applied to the jazz cannon. He's at home with funk and groove music. He adds a bold spirit to Mayer's band in a smooth sonic contrast to the flailing guitar. On an August night at the esteemed Caffe Lena in Saratoga Springs, NY, with the Larry Carlton quintet, he tossed out gritty and soulful sounds, somewhat reminiscent of one of his influences, Grover Washington Jr., on tunes associated with the guitarist, including the guitarist's originals and songs from the Crusaders and Steely Dan. He expertly added an extra sophisticated layer to the sound.

"I am a jazz musician. It's just that—what does that term mean?" he says over lunch before the Carlton gig. "It has everything to do with that person leveraging the term and their associations to that. Is the person saying that and the only jazz they've heard is Kenny G? Or the only jazz they've ever heard stopped at Benny Goodman? Or they only are into Vijay Iyer? Which jazz are you talking about? I don't mind the term because it is somewhat of a helpful categorization ... So I am a jazz musician, but it's a case by case thing."

"Just because something ascribes to that word, doesn't mean it's something I'm going to like," he says after pauses. He selects the words carefully, because he is not biting the hand feeds jazz musicians. He understands and respects it. Yet, "There's so much I don't like. Jazz happens to be the music that has the strongest concentration of playing music with a lot spontaneity in it, and needing a high skill level. But the problem from my viewpoint is that it's become so ... So much of it has become cerebral, self-indulgent. Where's the connection?

His newest CD, Quartet, is an example. The eight compositions played by a group that has been together for about two years, developing a chemistry and a language that can only be developed when groups stay together—Ruslan Sirota on keyboards, Janek Gwizdala on bass and Chaun Horton on drums. The music is jazz and the improvisations are outstanding. The songs are at times mellow, funky and ethereal, but they can be felt and absorbed.

"That's my roots, jazz. But the way that I come at music as a composer, bandleader, doesn't tend to be walking bass line swing. It's swing, inside of other feels. It's swing, but it's not like 'Autumn Leaves.' I enjoy playing over those kinds of things, but as a composer it doesn't feel like it's my language when I write. Where I'm coming from as a writer tends to be more about merging all of my musical influences. I grew up in the '80s. All the music I've been hearing since then is what informs the sounds in my head, as much as Sonny Stitt and Dexter Gordon, who I've spent half my life checking out," he says.

"The reason this album is called Quartet is because it's the first time I've really felt that moniker. It gets tossed around so casually to describe the number of persons on the stage and who's leading that band. The so-and-so quartet. Most of the time, in the jazz world, it means one guy got the gig and three people are playing with him. It's a different set of people most of the time. It's rare it's actually a band that's together. This has been a band for me for two years. We play once a month in Los Angeles. We've had a residency at the Baked Potato for about two years. It is bass, piano, keys and drums ... This is actually the first time I've had a band that is a quartet. It also feels like the most sincere representation of my take on that."

It was recorded live, with a small audience, with all four musicians in the same room. No headphones. The session was also captured, tune by tune, and put on YouTube.

Reynolds has known Gwizdala for over 20 years, going back to the Berklee School of Music they attended. I've been playing with him for over 20 years. Gwizdala knew Sirota from Berklee. Horton has played for about a decade with Reynolds in LA.

The previous CD, Hindsight, had Rogers on bass, Goldberg on piano and Calvaire on drums "Great band. The only time we played together as a band was the two days in the studio when we recorded that album. That's the norm. You go in the studio and get the best guys you can for one day; if you're lucky two days. I'm proud of that album," says Reynolds. "But it's a different animal. There are certain things that are not going to happen until you're playing music with people, repetitively, over time. The chance to build that unspoken vocabulary is a rare thing."

The group did a tour of Europe early this year, to great acclaim. All of this surrounding a band that many people—especially in the booking and promoting end—were not particularly aware of. Reynolds used his social media acumen to turn it into a mostly sold-out tour.

"That was incredible. Over half of it was sold out. We played the Bimhuis [in Amsterdam, Holland. Listen to the show]. Four hundred people packed. People sitting on the floor, on the stairs. What people were responding to after every show ... I talked to so many people ... I don't remember one person saying, 'What an amazing saxophone solo' or 'What an amazing piano solo.' What people were moved by was the band chemistry. That's what we thrive on."

"It started with one person who wanted to bring me over to headline the London Saxophone Festival. That started the ball rolling," but their was a lack of big-time recognition that makes promoters balk at taking any risk. "So I made a bunch of YouTube videos and put out stuff to my email list and social media and I told people—Don't email me and ask 'When are you coming to Berlin? When are you coming to Madrid? Here's the booking agency. Here's their Facebook page. Their email. Their website. Tell them.' And people just blew it up. They got inundated with requests and that's why they booked the tour."

Something Lester Young could not have done.

In Germany, the promoter told Reynolds he could have booked a bigger venue and sold many more tickets, had he known more. He wasn't well known in Rotterdam, Holland, but left with a connection to possibly play next year's North Sea Jazz Festival. "I have a connection to the audience, but none of the in-between people have any idea who I am," says the bandleader.

In the U.S., he says, its a tougher task. Promoters stick to the top names and what hot CDs might be out. Nightclubs are the same. Reynolds is looking at a possible east coast tour, maybe midwest, but the logistics are difficult. It is also hard too fill in enough smaller gigs between major cities. He spent a considerable up-front money to pay the band, hotel bills, air fares and the like for the European tour.

The life of a musician is more blood, sweat and tears than glamour. "You do what you can. You play with other people and try to save up a bank to be spent on doing your own thing."

The journey to "his own thing" started at age 13. He was living in Jacksonville, Fla., having moved from his native New Jersey. Reynolds wanted to join the band to learn an instrument—not necessarily saxophone—and learn how to write music. He was interested in film music. He decided on clarinet, but his family couldn't afford it. He ended up getting a saxophone from a neighbor that was not being used. He began playing it on his own. "Somewhere I got a hold of a book that had a blues scale. I remember playing the blues scale and going, 'Oh. This sounds cool.' That was the beginning."

He says the first saxophone he remembers hearing was Kenny G, who was on the VH-1 music video station. Then he moved to Grover Washington and Cannonball Adderley. "Then at the arts school I was with young guys who showed me things like Sonny Stitt. It became like, 'Oh my gosh.' It kept going deeper and deeper. My biggest influences became Joe Henderson and Stan Getz. Two huge early influences because of their sounds." He listened to Coltrane's earlier period and also Stanley Turrentine, Gene Ammons, King Curtis and Ben Webster. Of more current players, Joshua Redman and Chris Potter made a strong impact. His listening expands today to Kenny Garrett, Branford Marsalis, Joe Lovano, Michael Brecker and Kirk Whalum.

In Jacksonville, he attended Douglas Anderson School of the Arts. It had a strong music program with a lot of jazz, and Reynolds had good mentors. He also sat in at night with the local piano trio. It was a god foundation and landed him at Berklee. "All most everything that I've done professionally can be traced back to the people that I met and the experiences there [Berklee]. That's where I met John Mayer."

At the Boston-based college school, he played at a club called Wally's where trumpeter Jeremy Pelt would lead sessions. "It was heavy. Those guys were calling tunes super fast. Playing all these obscure Art Blakey tunes. Stuff like that. You'd get up the courage to go up and get your ass handed to you."