By JACK BOWERS
October 7, 2012
Sign in to view read count 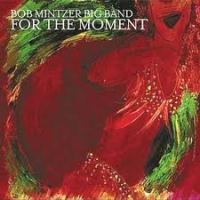 Anyone who has followed Bob Mintzer's career knows that the multi-talented saxophonist / educator has always had a special place in his heart for music from south of the border (he even recorded a big-band album, Latin from Manhattan, back in 1998). While perhaps best known as a member of the Yellowjackets, Mintzer has overseen his own big-band since 1983 (when he was asked by the Brecker brothers to form a working group) and has produced eighteen albums as leader of large ensembles including a dozen on the DMP label. For the Moment is Mintzer's fourth album for the Pittsburgh-based Manchester Craftsmen's Guild, following Live at MCG, Old School New Lessons and Swing Out. Mintzer's band earned a Grammy award in 2001 for its Homage to Count Basie.

What isn't as widely known is that Mintzer has written more than two hundred big-band arrangements (all of those on For the Moment are his). He also composed four of the songs ("Aha," "For the Moment," "Recife," "Ouro Preto") to complement others by Baden Powell ("Berimbau") and Antonio Carlos Jobim ("Corcovado"), two by Brazilian guitarist Chico Pinheiro ("Um Filme," "Irrequieto") and the standard "For All We Know" (like the others, overlaid with a charming Latin veneer). "For All We Know" is a showpiece for one of Mintzer's teammates in the Yellowjackets, pianist Russell Ferrante, who solos again (with Mintzer) on the rhythmically intense "Aha," which opens the album. Pinheiro puts his nimble guitar to work on "Irrequieto" and "Um Filme," and also sings on "Filme" and "Corcovado." Pinheiro sings well, even though for reasons unknown (something in the water?), Brazilian vocalists have a way of sounding interchangeable.

Mintzer, as is his due as leader, solos on three numbers but assigns ample space to others including Pinheiro, Ferrante, trumpeter Scott Wendholt ("Irrequieto," "Recife"), trombonist Michael Davis (the buoyant "Berimbau"), baritone Frank Basile ("For the Moment") and tenor Bob Malach ("Ouro Preto"), none of whom is less than impressive. Mintzer's solo are enterprising as well, but even so, it is his bright and colorful charts that are as appetizing as anything on the menu. Clearly, he is upbeat and at ease in a Latin milieu, writing and arranging songs that are invariably engaging and pleasing to the ears. As rhythm is paramount, a cohesive rhythm section is essential, and Mintzer has one in Pinheiro, Ferrante, "second guitarist" Marty Ashby, bassist Lincoln Goines, percussionist Alex Acuña (on three numbers) and especially drummer Peter Erskine, a model of power and perception in any circumstance. They help carry out Mintzer's master plan while assuring that the energy level remains high. There is, by the way, some barely perceptible applause during one or two numbers, indicating that an audience was present for at least a part of the recording session, even though no sound can be heard at the end of any song.

After nearly three decades as a bandleader, Mintzer continues to do his thing, and to do it well. For the Moment blends a high level of musicianship with Mintzer's always captivating compositions and arrangements to fashion another in a long series of admirable big-band albums, this one vastly enriched by its spicy Latin flavor. 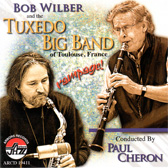 Rampage! is a festival of happy music that swings tenaciously, thanks to the singular talents of composer / arranger / clarinetist Bob Wilber (who is now in his mid-80s, believe it or not) and the Tuxedo Big Band from Toulouse, France, ably supervised by Paul Cheron (who doubles on lead alto). This is Wilber's third recording with the TBB, the first on which he has arranged every number and added eleven of his own compositions. Besides his usual clarinet and soprano saxophone (straight and curved), Wilber even plays alto on three tunes: "The Golden Rooster," "The Rabbit Jumps" and "Jonathan's Way," the first dedicated to Billy Strayhorn, the others to Johnny Hodges.

What is immediately apparent is that Wilber has an unerring ear for an engaging melody and a similarly precise awareness of suitable tempo. His charts are sharp and breezy, designed to encourage faces to smile and toes to tap, starting with Willie "The Lion" Smith's assertive "Rampage!" and continuing through "Puggles," a light-hearted blues inspired by Wilber's wife, Pug. In between are Wilber's charming tributes to a hotel ("Century Plaza"), a valley in Arizona ("Paradise Valley"), a former colleague, tenor saxophonist Bud Freeman ("Freeman's Way") and the Frank Sinatra / Nelson Riddle collaborations ("The Tender Ways of Love"). These are in addition to Strayhorn's "U.M.M.G," Sidney Bechet's "The Ghost of the Blues," Fats Waller's "How Can You Face Me?" and three more seductive pieces by Wilber: "Please Clarify" (written especially for the clarinet and inspired by Mel Powell's "Clarinade"), the graceful "Chasin' the Riff" and the pastoral ballad "Dreaming Butterfly."

Wilber solos on most numbers and betrays no evidence of decline, playing each instrument with an unflagging energy and enthusiasm that belie his age. Even though the TBB soloists are unnamed, they are quite good, and undoubtedly include alto Cheron, pianist Didier Datcharry, bassist Pierre-Luc Puig, drummer Guillaume Nouaux and guitarist Henri Cheron. The band's two tenors, Francois Penot and Stephane Barbier, solo smartly with an unlisted trumpeter on "Freeman's Way" and one of them is heard again on "Puggles." As a unit, the ensemble summons memories of another topnotch big band from France, that one led by pianist Claude Bolling. The cover design is tasteful, as are the liner notes by Dan Morgenstern. For those who appreciate big-band jazz that nods without apology toward the wondrous Swing Era, Rampage! comes with a "can't-miss" label affixed. 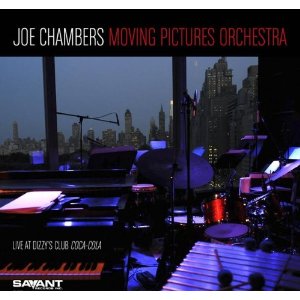 Joe Chambers, widely known as a drum-kit mainstay for celebrated artists from Andrew Hill to Bobby Hutcherson and Wayne Shorter, Freddie Hubbard to Charles Mingus and McCoy Tyner, spreads his compositional wings on Live at Dizzy's, shepherding his seventeen-member Moving Pictures Orchestra through a buoyant and colorful program that opens and closes with Chambers' ambitious five-part, four-movement "Moving Pictures Suite," commissioned in 2003 by Jazz at Lincoln Center. It's the capstone of a live session that includes the leader's mid-tempo charmer, "Tu-Way Pock-e-Way," Joe Henderson's intricate "Power to the People," Count Basie's sauntering "Theme from M Squad" (more laid-back than the original) and a pair of engaging compositions by drummer Max Roach, "Lonesome Lover" and "Mendacity," both capably sung by Nicole Guiland whose pleasing voice makes up for occasional lapses in intonation, especially on "Mendacity."

While there seems to be no reason why the Afro-Cuban "Clave de Bembe, Part 1" opens in the middle of trumpeter David Weiss' solo (no mention of that is made in the liner notes), what remains is splendid, consisting largely of a virile manifesto by percussionist Steve Berrios, which precedes nimble solos by pianist Xavier Davis and bassist Dwayne Burno. Part 1 segues seamlessly into Part 2 whose principal soloist is Davis, deftly supported by Berrios, Burno and Chambers. The album opens with the Suite's first three movements: the soulful "Prelude" (solos by trumpeter Josh Evans and alto Tim Green), the robust "Irina" (with Green, Chambers and trumpeter Greg Gisbert having their say) and even-tempered "Ruth" (Burno, Davis, Chambers on vibraphone). Craig Handy solos persuasively on soprano (with Green and trombonist Conrad Herwig) on "Power to the People," and on tenor (with trumpeter Weiss) on "M Squad." A second tenor, Sam Dillon, reinforces Guiland on "Lonesome Lover" and "Mendacity." Baritone Frank Basile and trombonist Steve Davis frame engaging solos on "Tu-Way Pock-e-Way."

Once Chambers decided to record the Moving Pictures Suite with a big band (his first such venture at age sixty-nine), he entrusted trumpeter Weiss with the task of assembling a group especially for the performance at Dizzy's on September 16, 2011. To say that Weiss completed the assignment with precision would be an understatement, as the results of his labors are expressly audible from start to finish. In other words, this is about as impressive a band as could have been envisioned. With Chambers, Burno, Davis and Berrios in control, the rhythm section sets the rhythmic course, and everyone else keeps pace. Chambers is an astute composer / arranger (he designed every chart save "Tu-Way Pock-e-Way") whose band, on this occasion, was clearly on the same page. Even though these Moving Pictures can only be heard, not seen, they are well worth hearing and appreciating. 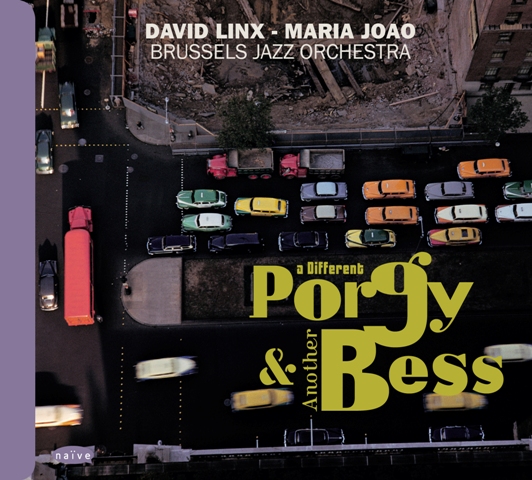 A Different Porgy & Another Bess

Lending truth in advertising its due, the Brussels Jazz Orchestra has implanted A Different Porgy & Another Bess in George Gershwin's classic American folk opera without claiming that they are in any way better than those who have preceded them, only different, leaving it to the listener's judgment to weigh the merits of this fresh interpretation when measured against those that have gone before. The different Porgy is Belgian vocalist David Linx, the new Bess Maria Joao, from Portugal. According to a press release that accompanied the album, Linx and Joao were voted Best Jazz Vocal Artists at the most recent French "Victoires de la Musique Jazz." More about them in a moment. Thanks to the BJO and its various arrangers, this is a jazzier version of P&B than is usually the case, placing it in the realm of classic recordings by Miles Davis and Bill Potts, neither of which, however, employed vocalists. It's also a moderately sanitized interpretation, an example of which is a lyric alteration that transforms "Bess You Is My Woman" to "Bess You Are My Woman," while "I Loves You Porgy" is now "I Love You Porgy." As in Stan Freberg's classic parody of "Old Man River" ("Elderly Man River"), no dialect is spoken here.

Returning to Linx and Joao, there's no doubt they can sing, confidently and on key. Linx's breathy tenor is pleasant enough, whereas Joao's Blossom Dearie-like "little girl" voice is an acquired taste. She has power, and is more impressive when she chooses to use it. One small problem, which holds true for both Linx and Joao, is that they are sometimes overpowered by the BJO's dynamic brass and reeds, which can make the lyrics difficult to apprehend. Aside from that, nothing censorious can be said about the ensemble, which is steady and resourceful throughout, embodying (unnamed) soloists whose statements are brief but cogent. This is the same BJO, by the way, which was responsible in part for producing the superb musical score for 2011's Oscar-winning "silent film," The Artist.