Bob James Trio with Randy Brecker at the Blue Note 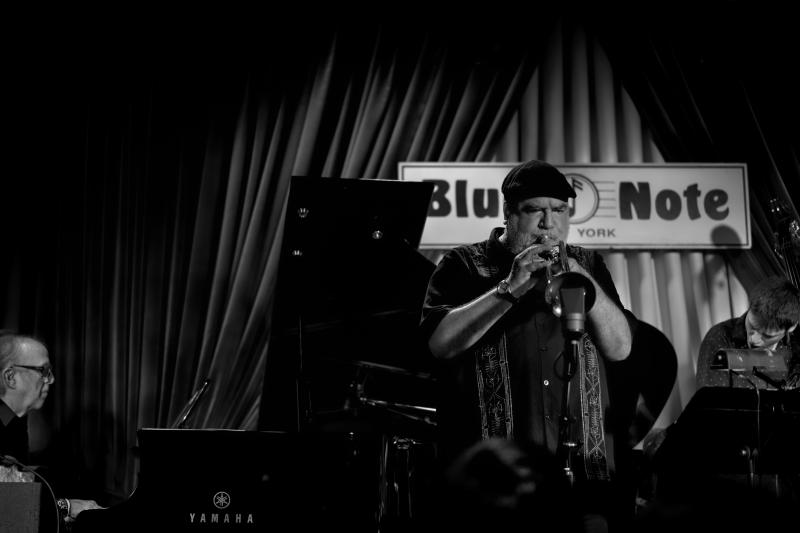 As part of a week-long residency at the Blue Note, legendary keyboardist-composer Bob James broke sonic bread with up-and-coming bassist Michael Palazzolo and faithful drummer Billy Kilson. The result of this communion was a head-nodding dive into one of jazz's most hallowed oeuvres. As was clear throughout this performance, central to the bandleader's commercial success—not counting the many times his music has been thrown into the genre blender of hip-hop—is his ability to forge bone-deep melodies and shine them through the lenses of simpatico musicians who care about everything they interpret.

The first three tunes of their second set put theory into practice, and then some. Two pianistic originals, "Avalabop" and "Night Crawler," sandwiched the Fender Rhodes romance of "Feel Like Making Love." Whether jumping headfirst into jaunty grooves or turning the lights down low, James approached even his best-known motifs with sheer enjoyment. Despite the distance of these classic tunes, he brought them to an immediate and intimate level of exchange that allowed freshness to flourish.

The welcoming of special guest Randy Brecker to the stage not only heightened but also deepened this Thursday night happening. The trumpeter showed a playful side in his own tunes, "Dipshit" and "Dirty Dogs," both of which yielded powerful notecraft from their composer and fierce virtuosity all around. He also painted with darker shades in ballads like James's own "Body and Soul," and deft cool in "Westchester Lady." But the real binary star of the night was the band's rhythm section. Kilson held down the smoothest forts of the gig, breezing through Gerry Mulligan's "Line for Lyons" and Grover Washington Jr.'s "Mister Magic" like a blade on ice. And then there was Palazzolo, whose name, like his talent, is sure to grow exponentially soon enough. His sense of rhythm, allegiance to the pocket, and charisma took the room by storm and held their own against the crowns.

Ultimately, however, the music's strength prevailed. Perhaps it's no coincidence that, at the time of this writing, James's age is 77, the atomic number of iridium—a metal which, like his music, is highly resistant to corrosion. Timelessness abounded, and lucky for us to be caught in its drift.