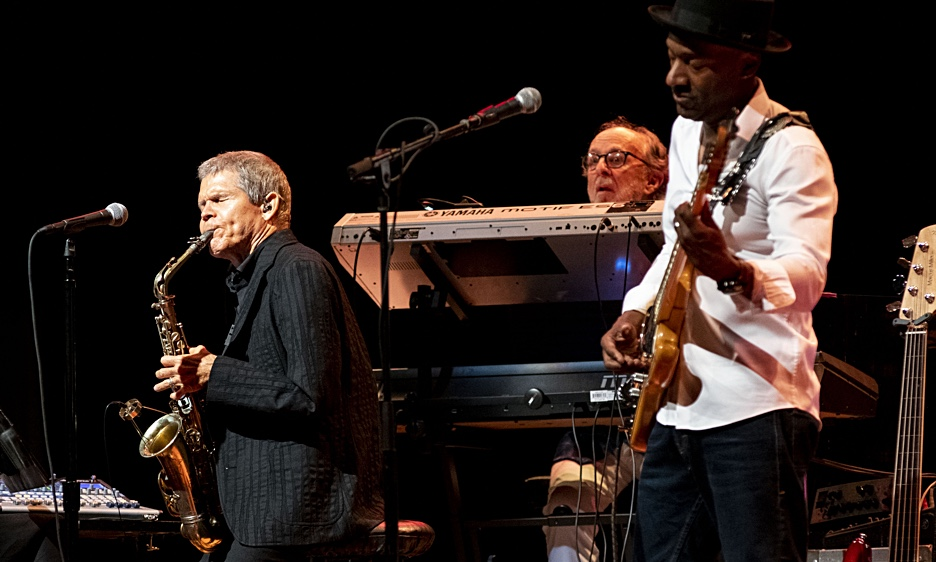 By JIM WORSLEY
October 4, 2019
Sign in to view read count

Backing a new record with a live tour is, of course, standard practice. So, a tour in support of Double Vision (Warner Brothers, 1986) would be nothing out of the ordinary. The Bob James and David Sanborn classic, that also features Marcus Miller and Steve Gadd, proved to be visionary in its scope and profound in its significance. So much so, that it won a Grammy for Best Improvisational Jazz Album in 1986. The tour seems like it was only yesterday. Primarily because it was. Some thirty-three years later James, Sanborn, and Miller (sans Gadd) finally did the tour. I'm sure Gadd would have been part of it as well, if not for being on tour with Eric Clapton. Drummer Billy Kilson (Dave Holland, James) filled in and fit in nicely. Singer Larry Braggs (Tower of Power, The Temptations) was also on board, providing a couple of powerful and emotive vocals.

The obvious question is, why did it take thirty-three years? Well, it seems they finally all had time to fit it into their schedules! All their solo careers were skyrocketing back then, and the record took flight on the charts even without a tour to highlight it. It, indeed, was on the Billboard charts for over a year. Now, three decades-plus later, their career paths intersect. Better late than never, is more than an old adage in this scenario. A tour was not needed, or essential, this far down the road. That declaration leads, in large part, to its beauty. James, Sanborn, and Miller reunited because they wanted to, not because they needed to. They still longed to play these songs together. Now to embrace them, rather than to promote them. The musicians have matured, and most engagingly, so have the tunes.

The tour was presented in venues with seating in the one thousand to fifteen hundred people range, with one notable exception. Because of their mutual respect and admiration for the Musical Instrument Museum (MIM) in Phoenix, Arizona, they did one very special performance in their intimate two hundred ninety-nine seat performing arts center. This historic occasion became a memorable and moving evening of rich and contemplative jazz.

In deference to the order the songs were placed on the album, they opened with the Miller penned "More Than Friends." Seemingly a good choice for a variant of reasons. The album opens with "Maputo," a song that has become perhaps the album's most recognizable tune. The mystic and sophisticated tune was kept in their hip pockets for now. "More Than Friends" has a great mid-tempo groove that set a nice tone for everyone, artists and audience, to settle in for the evening. Accessible, yet substantial. The irresistible strains of "Moon Tune" followed. The band wasted no time getting into James' rich dialogue. They were in no rush, taking the audience on an extraordinarily beautiful journey. James then stood from his piano bench to address the crowd. As he started to speak, he then paused and took a breath. He momentarily explained that he had just finished taking in the auspicious museum and was simply speechless. The MIM is indeed awe inspiring, larger than life, and somewhere between overwhelming and invigorating. The James/Sanborn co-write "Never Enough" was up next. James launched into some soloing and intelligent improvising that had his bandmates, as well as the audience, smiling and shaking their heads in appreciation. Miller reminded, or informed the crowd, that long ago, in his handsomely successful career, James played with the incomparable Sarah Vaughan. This prompting James (about twenty years Miller's senior) to smile and remark, "Hey Marcus, were you even alive then?"

Larry Braggs then walked onto the stage. The classic "You Don't Know Me," perhaps best known as sung by Ray Charles or Mickey Gilley or by co-composer Eddy Arnold, although recorded by many, is an instrumental on Double Vision. The generally vocal melody was instead played sweetly and with a profound depth of feelings by Sanborn. Here, Sanborn recreates that feel and is joined by Braggs on vocal. Braggs reaches deep and aligns with Sanborn in this show stopping rendition. The crowd was brought to their feet on this one. As Braggs walked off the stage, Miller laughed as he said. "I hate it when a guy comes out here and just blows up the stage and then just walks away." In a delightful and surprising turn of events, the band then announced they were going to switch it up and then get back to Double Vision. After receiving an affirmative response to the question, "Do you folks remember Grover Washington Jr.?," Miller then gave a little background on the tune "Mister Magic," the title track from Washington's album Mister Magic (Kudo,1975). Most appropriately, that James both played on, and arranged, the album. The funk driven tune allowed Miller to really do his thing and led into a fiery exchange between Miller and Kilson. They were having a lot of funky fun with grooves and beats. Consequently, so was the fully engaged and respectively quiet crowd. The MIM has gained a reputation as a venue where people thankfully stay seated and LISTEN to the music. Within that silence, you could feel the collective "Ahhh" as Miller's "Maputo" began to wash over us like a gentle mist. Yes, the time had come for this airy and opulent gem to take center stage and further expand the already scintillatingly diverse course of jazz enlightenment. The set finished with Braggs back on stage to sing "Since I Fell for You." On the album, Al Jarreau's version is stunning. There is really no other word for it. The conversation he had with Sanborn is remarkably moving (this version is also paid tribute by being displayed in the audio/video section below). Therefore, I didn't know what to expect from Braggs. There were some awfully big shoes to fill. With a mix of Jarreau-like voicings and his own heartfelt take, Braggs again, to borrow Miller's phrase, "blew up the stage."

With such a wealth of material to choose from, it was fun in itself just wondering what direction and which selections they would bring forth in their encore. James started it off with a brief touch upon his "Angela" (perhaps better known as the theme from Taxi) from Touchdown (Columbia,1976). From that mellow familiarity they kicked into Sanborn's explosive "Chicago Song" from A Change of Heart (Warner Brothers, 1987). Kick it in they did! Firing on all cylinders, while joyfully and dynamically playing off each other, and eventually bopping into a tasty round of James' warmly received "Westchester Lady" from 3 (Warner Brothers,1976). They wrapped it up, and called it a night, by sliding back into "Chicago Song" with rousing and penetrating exchanges.

An evening to remember. An evening to cherish and fully appreciate, all stemming from an album many have cherished for thirty-three years now. Again, as more than hinted towards earlier, these guys were having fun. They completely embraced the music and the opportunity to play with each other. That was a big part of what made this long over-due reunion tour so very special. It was worth the wait, and then some! Not all records, even Grammy winning efforts, stand the test of time. Double Vision is that old friend that still looks fit and robust, or that bottle of wine aged to even more comfortably chill with. It takes its place standing amongst the tallest jazz trees. Hearing it performed live was a vibrant reminder of its breathtaking virtues and timeless allures.