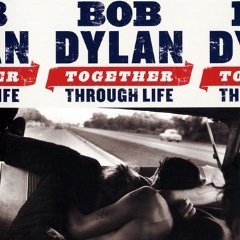 Bob Dylan
Together Through Life
Columbia
2009

Let's put it out here right up front and not pussyfoot around: Together Through Life is one of the finest discs in singer/guitarist Bob Dylan's 40-plus album discography. It's up there with other benchmark Columbia releases like the groundbreaking Highway 61 Revisited (1965), Blonde On Blonde (1966), John Wesley Harding(1967), the underrated New Morning (1970), Blood On The Tracks (1975)—together comprising Dylan's early burst of genius—and more recently, Time Out Of Mind (1997), Love and Theft (2001), and now Together Through Life.

Good arguments can be made for the inclusion of several other Columbia sets in this rarified company, including Infidels (1983), Oh Mercy (1989) and Modern Times (2006). But what separates those sets from the top eight are unevenness—a few too many weak songs mixed in with the otherwise excellent stuff of "Jokerman" and "Sweetheart Like You" (Infidels), "Political World" and "Man In The Long Black Coat" (Oh Mercy), and "Thunder On The Mountain" and "Ain't Talkin'" (Modern Times).

Together Through Life, like the seven other sets in the finest list, has a continuity of mood and sound, and not one song that makes the listener think about hitting the skip button. It sounds, in fact, like a well put together live set by an often hard-rocking, guitar driven band that's having a helluva good time. Much of the sound is similar to that of "Cold Irons Bound," from Time Out Of Mind or "Cry Awhile" from Love and Theft, sweetened throughout by accordionist David Hidalgo (of Los Lobos). Dylan's voice is ravaged, a bearish grumble. Who would have predicted, back in 1965, when "Like A Rolling Stone" hit the radio, that the nasal, reedy pipes would deepen into a Charlie Patton/Howlin' Wolf growl.

The disc opens with "Beyond Here Lies Nothing," its hard metal guitar slashing in front of Hidalgo's counterpoint-cool accordion washes—it's a temporal love song, with Dylan's subterranean voice rumbling up from his gut. "Life Is Hard" is another lost-love song, a lilting acoustic ballad with Dylan sounding weary and dispirited about living without the object of his affection.

"My Wife's Home Town" (which happens to be Hell) is tagged with co-writing credits to Willie Dixon, the bassist/tunesmith who penned so many of the hits for bluesmen Howlin' Wolf and Muddy Waters back in Chess Records' 1950s heyday. It does indeed sound like something Waters would have recorded at Chess, with Hidalgo's accordion sitting in for Little Walter's harmonica inside the insistent blues rhythm.

"If You Ever Go To Houston" swings with a bright buoyancy, and is perhaps the prettiest tune of the set, an old man's raspy advice to a young traveler. "Forgetful Heart" is full of dark doom, guitars crunching like muted machinery. "Jolene," a bluesy highlight in the mode of "Thunder On The Mountain" or "Summer Days" (Love and Theft), is a joyful, crank-up-the-volume, Howlin' Wolf knock-off, replete with Hubert Sumlin-like guitar riffs.

"This Dream Of You" takes the sound down south of the border, in the mode of "Romance in Durango" (Desire, Columbia Records, 1976), with an accordion warble, a song that wouldn't sound out of place in the hands of an Ensenada sidewalk mariachi band. "Shake Shake Shake" nods, again, to Howlin' Wolf, a drumbeat and crunchy guitar laden wall shaker. "I Feel a Change Comin' On" features Dylan sounding as relaxed and optimistic, as in love with life, as he did on "The Man In Me" (from New Morning).

The records closes with "It's All Good," steeped in a typically biting Dylan sarcasm. He recites a litany of societal woes—in a mode rhythmically reminiscent of "Political World" (from Oh Mercy)—punctuated by the proclamation, "It's All Good," and finishing up with a knowing cackle.

With Together Through Life, Bob Dylan, whose recording career began in 1962, proves he is still a vital artist, capable of producing a work that stands with his best.


Tracks: Beyond Here Lies Nothing; Life Is Hard; My Wife's Home Town; If You Ever Go To Houston; Forgetful Heart; Jolene; This Dream Of You; Shake Shake Shake; I Feel A Change Comin' On; It's All Good.