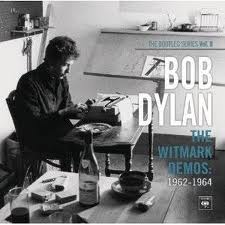 Like most of Bob Dylan's best work, The Bootleg Series, Vol. 9 The Witmark Demos 1962-1964 is more than first meets the eye and ear. A collection of demo versions of new compositions meant to be circulated by Dylan's publishing company, this span of 47 songs is only one noteworthy aspect of the two CD collection.

The informal, spontaneous atmosphere in which these numbers were recorded may have set the tone for Dylan's recording career in the studio. The man is now famous (or notorious) for preferring fewer takes over more, with an emphasis on the fresh rather than the perfectly-crafted. It's easy to be persuaded to that point of view hearing how he nails "The Times They Are A'Changin'" on grand piano, or how, on that same instrument for "Mr. Tambourine Man," Dylan's playing and singing is the definition of his own line "my weariness amazes me."

Which may go back again to his approach to the songs that comprise The Witmark Demos and extend to his comparably off-the-cuff approach with The Band for The Basement Tapes (Columbia, 1975). Allowing the song to shape the performance rather than the other way around, Dylan's rough-hewn approach to singing and playing guitar and harmonica is in stark contrast to the careful craftsmanship he applied to his material, even though it's no less distinctive. And doubtlessly those who find fault with his voice will not find this rendition of "I'll Keep It With Mine" anything to change their minds, but the nimble phrasing makes a great distinction between that nasal sound itself and the way he uses it.

It isn't long into the first disc before the pleasure Dylan takes in performing becomes palpable. On "Poor Boy Blues," and even more so the good-humored miscues during "Man in the Street," the abandon in his voice as it swoops and dives is as overt as the determined restraint and timekeeping on "Ballad of a Friend." Equally important though, the artist himself becomes aware of the progress he's making in rewriting the rules of contemporary folk music.

The tone of Colin Escott's essay in the enclosed booklet may be too academic for its own good—there's a distinct lack of a fan's passion in the flow of words—but he does hit the bulls-eye in declaring how The Witmark Demos trace the evolution of Dylan's songwriting: from its early absorption of the folk traditions he so admired and then on to a personal approach absolutely wondrous in its idiosyncrasy. And the writer does quantify how Dylan's prodigious output, as well as its style, undermined the songwriting establishment and, by extension, the recording industry itself, as artists became self-sufficient on the performing front as well as the composing front (the Beatles' advent the punctuation on that statement).

Contrary to most of the photos showing an unlined countenance, Dylan sounds older than his years through most of these discs, which only makes sense given the precocious sense of perspective that informs the most original songs here. That this young man had both the ambition and the secure sense of self to compose the anthemic topical likes of "A Hard Rain's Gonna Fall" as well as the deeply personal "Tomorrow Is A Long Time" is the genuine mark of genius: like the best in any art form, the best Dylan speaks equally clearly in universal as well as individual terms.

There's no pretense to true high fidelity in these mono recordings, but then technology then wasn't what it is now and sonic accuracy wasn't the point here anyway. The bare-bones approach, however, lends itself to revealing the nuance of Dylan as a songwriter and a singer because it's impossible to miss the sarcastic irony in the words and delivery of the otherwise muffled sonics of "Long Ago Far Away."

In such a conflicting context Bob Dylan radiates unerring instincts in such a way he as well as even the casual listeners can't miss it—which no doubt has led to his continuing preference for sometimes quick-to-a-fault recordings in the later stages of his career . What he may have subsequently missed, but nevertheless can't be lost on those hearing The Witmark Demos, is that focused concentration on his material—and, in turn, on performance that so faithfully renders that material.

Tracks: CD1: Man On The Street (Fragment); Hard Times In New York Town; Poor Boy Blues; Ballad For A Friend; Rambling, Gambling Willie; Talking Bear Mountain Picnic Massacre Blues; Standing On The Highway; Man On The Street; Blowin' In The Wind; Long Ago, Far Away; A Hard Rain's A-Gonna Fall; Tomorrow Is A Long Time; The Death of Emmett Till; Let Me Die In My Footsteps; Ballad Of Hollis Brown; Quit Your Low Down Ways; Baby, I'm In The Mood For You; Bound To Lose, Bound To Win; All Over You; I'd Hate To Be You On That Dreadful Day; Long Time Gone; Talkin' John Birch Paranoid Blues; Masters Of War; Oxford Town; Farewell. CD2: Don't Think Twice, It's All Right; Walkin' Down The Line; I Shall Be Free; Bob Dylan's Blues; Bob Dylan's Dream; Boots Of Spanish Leather; Walls of Red Wing; Girl From The North Country; Seven Curse; Hero Blues; Whatcha Gonna Do?; Gypsy Lou; Ain't Gonna Grieve; John Brown; Only A Hobo; When The Ship Comes In; The Times They Are A-Changin'; Paths Of Victory; Guess I'm Doing Fine; Baby Let Me Follow You Down; Mama, You Been On My Mind; Mr. Tambourine Man; I'll Keep It With Mine