By ROGER FARBEY
December 26, 2015
Sign in to view read count 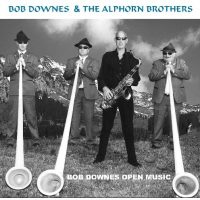 This surely must be one of the strangest team-ups in jazz? A trio of German alpine horn players and British expatriate and jazz phenomenon Bob Downes. It may be an unconventional alliance, but somehow this album works at a very convincing level. Recorded in 2004 in his adopted home country of Germany, Downes wrote and arranged all the music and lyrics presented here. The almost surreal photomontage cover enhances the attractiveness of the CD but gives no adequate clue as to how well this archival recording works.

Downes has made some notable albums in his long musical career, including Diversions, Electric City and Hell's Angels and is undoubtedly one of the world's finest jazz multi-instrumentalists (he plays around 25 instruments). Downes' influences and involvements have been both eclectic and esoteric, his compositions having ranged from jazz rock to avant-garde, including scores written for performances by Ballet Rambert.

"Head For The Blues" mixes the deep tuba-like notes of the alphorns with Downes' lithe tenor sax. "Stomping," again with Downes on tenor sax, has the alphorns producing a contrapuntal brass band effect. In common with the bugle, the alphorn has no valves or pitch altering device other than by dint of altered lip vibrations, so the tonal colour produced by the horns on "Dawn Approach" is all the more remarkable, supplying a perfectly contrasting backing to Downes' languid flute.

On "Dr Love" just one of several tracks where Downes lays down some excellent vocals, he is accompanied by finger clicks and a resonant percussive effect, realised by the slapping of the alphorn mouthpiece. "I Got The Drift Baby" with bluesy vocals and breathy flute reminds the listener of the effectiveness of brass as an accompanying medium. Whilst in this case the "brass" is actually a hand carved wood tube, the similarity in tone is uncanny. After a vocal introduction worthy of his songs on Electric City, "Goin' Down To New Orleans" sees Downes soloing on soprano sax. By contrast "The Prowler" is an instrumental loosely bases on "The Pink Panther" with the phrasing and harmony arrangements of the alphorns reminiscent of the late-lamented S.O.S.(Surman, Osborne, Skidmore) trio of horns. "God Bless Your Blues" is a deep down heavy blues, but it's a telling fact that Downes' voice has lost none of its potency that he's maintained over a career spanning almost half a century.

Given the limitations of the alphorn, the elephantine sounds that these instruments evince on "Pink Elephants" are extraordinary and on a par with those similarly wild pachyderm evocations on King Crimson's "Elephant Talk." The appropriately-titled "Sundown" could easily be compared to a jazz version of "The Last Post" with plaintive alto sax wailing over the sombre alphorns. It's actually based on "Bess You Is My Woman Now." Downes' piercingly strident vocals are delivered over a horn vamp on "When the Blues Are Bluer Than Blue" and are embellished by alto sax extemporization. "Reflections" treats the listener to an example of Downes' virtuosity on flute where he might easily qualify, without fear of exaggeration, as one of jazz's greatest living exponents of that instrument. "Tatsunori Hasebe," previously heard on Downes' album You're Funkin' Good, provides an excellent vocal conclusion to a truly remarkable album.

[Note: Packaged with this CD is a bonus disc comprising four tracks, with Downes accompanied by Mick Baumeister on piano].

Heading For The Blues; Stomping; Dawn Approach; Dr. Love; I Got The Drift Baby; Goin’ Down To New Orleans; The Prowler; God Bless Your Blues; Pink Elephants; Sundown; When the Blues Are Bluer Than Blue; Reflections; Tatsunori Hasebe.