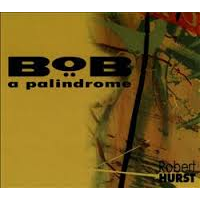 Detroiter Robert Hurst has been considered one of the best bassists to come out of the Jazz Renaissance of the '80s. His melodicism, technique, and harmonic acumen positioned him as a first- string bass man. Trumpeter Wynton Marsalis made him his bottom man for the better part of the '80s, and as part of saxophonist Branford Marsalis fabled "X-men," Hurst, pianist Kenny Kirkland, and drummer Jeff "Tain" Watts were considered to be arguably the best rhythm section in jazz during that period.

After his fabled stint on The Tonight Show, Hurst has spent the last 10 years teaching at the University of Michigan, working on his compositional skills, and has put out some superb recordings as a result. Bob: A Palindrome, is an all-star project which, interestingly enough, has been sitting on the shelf since 2001, but still gives an incisive glimpse into his current creative direction.

The music on the date is quite melodic while only a couple of tunes would fall into the classic bop/swing category. The opening "3 For Lawrence," is an elegiac homage to the late Detroit jazz master (and one of Hurst's mentors), composer/multi-instrumentalist Lawrence Williams. The tune is highlighted by an all-too-seldom turn on alto flute by the great Bennie Maupin and some superb piano work by a then unknown Robert Glasper.

Hurst then ventures into Mwandishisi territory on the next tune, "Picked From Nick," which includes some ethereal space-funk by Glasper on Rhodes and a smooth airy solo by Hurst's legendary mentor, Marcus Belgrave, on flugelhorn. On "Big Queen" and "Little Queen," Hurst honors his wife and daughter. The highlight of "Big Queen" is a fiery soprano solo by Hurst's old crime partner Branford Marsalis. Anytime you have Hurst on the set, his brother-in-arms, "Tain," is surely around. "Tiger's On Venus" is a return to the old "X-men" days with a thunderous opening by Watts, and some more of that inspired soprano work by Marsalis.

Hurst spreads out his compositional chops with an ambitious work titled "Middle Passage Suite," which pays homage to the victims of the American Holocaust. The brief first passage serves as an intro for the dirge-like "For Those of Us That Didn't Who Make It," which is distinguished by an ominous piano ostinato and some hypnotic bata drumming.

It is "The Third Passage," though, that brings the heat to the set. It starts off with a melodic solo by Hurst and climaxes with Marsalis and Maupin engaging in an out 'n out gunfight on tenor and soprano, while Watts' power is unleashed. The date concludes with some Detroit funk on "Jammin'—a.k.a. Ichabod," where everyone involved gets to lay out on their instruments. Even though BoB: a Palindrome has some age on it, Hurst's inspired compositions and first-rate production values make this one of the highlights of the 2013 season.