Michaela Rae: Blues with a Backbone

By WOODROW WILKINS
November 22, 2009
Sign in to view read count 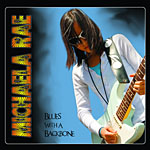 There are many who believe the blues is dying, a feeling reinforced by the fact that many of the major icons in this genre are over 80, like B.B. King, Pinetop Perkins and David "Honeyboy" Edwards. However, there is youth in the blues, like Homemade Jamz and now, Michaela Rae Knox.

This 14-year-old Colorado guitarist has been playing for 10 years. During her development, she has performed at the Mile High Blues Festival and the International Blues Challenge. On Blues with a Backbone, she is accompanied by guitarist Dave Beegle, bassist Michael Olson and drummer Matt Henderson.

"Green Onions" begins the set, with Knox injecting a juke house feel as she plays lead on this cover of the Booker T & the MG's classic. After the melody faithfully follows the original arrangement, the leader goes off on an improvisational tangent, with the sidemen tight, if not spectacular.

There's the temptation to shout, "Don't do it!" as Knox sings "Trust in You." A cool beat accompanies her voice as she says, "I hope you know I love you; I put all my trust in you." It's the hardcore lead guitar that makes this song sizzle, however, with Olson, Beegle and Henderson more involved and distinguishing themselves individually, while still maintaining collective cohesion.

"Sin Nombre" is one of three Knox/Beegle originals. Visions of a classic Pete Souders piece are conjured up as Knox shows some range. Her play is clean, with no obvious squeaks. The song is a bit slower, and Knox skillfully moves from sustained notes to extended patterns, at times making the instrument twang.

The group lets loose on "Big Easy Blues," a high-energy original, while its cover of Stevie Ray Vaughan's "Phonebook Blues" is another juke joint special. The band also delivers a playful rendition of Buddy Guy's take on "Mary Had a Little Lamb."

When she's not playing the blues, Michaela Rae races dragsters, runs track, excels in art and math and enjoys being a teenager. She's already at work on her follow-up to Blues with a Backbone.