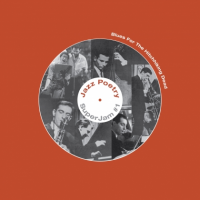 It's not jazz, it's not poetry, it's jazzpoetry. At least, that's what Jerry Hooker called it in a review of the 12 March 1962 performance at Southampton University that is captured on Blues For The Hitchhiking Dead. Two of the UK's foremost poets combined with five of the country's finest jazz musicians to become The Live New Departures Jazz Poetry Septet, bringing this relatively newfangled combination of words and music if not to the masses then at least to an enthusiastic crowd of students.

Thanks to vinyl specialists Gearbox Records the evening can now be enjoyed on a lavishly-packaged, limited edition, double album complete with a 28-page book. The poets are Pete Brown and Michael Horovitz—both were involved in putting this package together. The players include pianist Stan Tracey and tenor saxophonist Bobby Wellins, two of the most influential figures in British jazz. Every one of the septet would go on to enjoy lengthy and creative careers: Brown, most famously, as lyricist for some of Cream's best-known songs.

"McTaggart's Blues," written by Wellins, gives the band a chance to show off their chops before the poets take the stage. It's a lengthy, punchy, slice of post-bop. Jeff Clyne's pulsating double bass propels the tune confidently, leaving Laurie Morgan space to get creative with some stabbing, emphatic drum phrases. Wellins, Tracey and trombonist John Mumford play with real energy and confidence. Mumford's trombone also does much to add to the dark and pessimistic atmosphere of Brown's "Night."

Dark pessimism is at the core of "Blues For The Hitchhiking Dead." It's the album's sprawling centerpiece: a 54-minute magnum opus on which Horovitz and Brown take it in turns to deliver the narrative. The poets' contrasting styles are fascinating. Brown's Everyman voice is relaxed, friendly and familiar: Horovitz' patrician tones sound oddly old-fashioned and rather school-masterly. On an early, brief, exchange the pair resemble Vladimir and Estragon—waiting not for Godot, but for a friendly driver to stop and offer them a ride. The musicians—Morgan and Tracey in particular—underpin the poets' performances with imaginative and sympathetic playing, heightening the impact of the words, sometimes controlling the tempo, sometimes following the rhythm and pace of the voices.

The Gearbox Records team have done a great job on production, using an original recording made by a friend of the group, Victor Schonfield, on a reel-to-reel tape recorder. It's not perfect—fifty years haven't been kind to the audio source and it's doubtful if Schonfield used cutting edge technology in the first place. Does it matter? If audiophile sound quality is everything, then it will—if a chance to experience jazzpoetry in all its glory is more important then it shouldn't. After all, scratchy singles and EPs played on a cheap little Dansette were the height of hip listening in '62.

Blues For The Hitchhiking Dead captures the spirit of a short-lived but still influential movement. It would be worthwhile simply as a historical document—thankfully it's also damn fine entertainment.