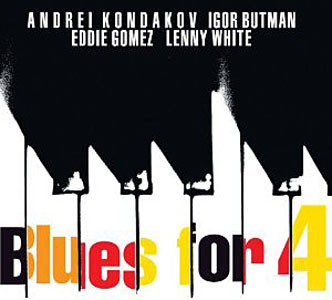 Russian music has a mile-wide streak of tragedy and sorrow running through it. If Americans hadn't invented it first, the blues could have been born on the banks of the Volga River, instead of the Mississippi. But it wasn't, so the closest thing to seeing how that might have turned out is Blues for 4, featuring a pair of Russian musicians, saxophonist Igor Butman with pianist Adrei Kondakov, along with American veterans, drummer Lenny White and the great bassist, Eddie Gomez. Recorded in 1996 and released in Russia on the Soyuz label, the album has now been re-released on Butman's own American imprint.

They nailed it. The compositions, all written by Kondakov, make for a terrific set of straight-ahead grooves, betraying no sign of their Cyrillic origins. By 1996, Butman had spent almost a decade in New York, steeping himself in the jazz world and circulating among the music's A- listers. Kondakov, still based in Russia, had been playing with a diverse, high quality selection of American and European players. By the time this record was cut their chops were down cold.

Opening with "Love and Hope" Butman's tenor work is creamy smooth, emotive, and engaging to hear. He perfectly combines terrific technical facility with an equally developed sense of taste and emotion. Switching to soprano for "Sundial," he deftly lays the soft melody over the rest of the band.

Of course, as the composer, Kondakov has a lot to say on this album. His playing, too, is smooth and well-considered, developing melodies with a combination of tight comping and expressive lead playing—the anchor of consistency for the album's overall feel. There is a lot of great piano playing, but the closing title track delivers it best: Kondakov using the full harmonic depth of the eighty-eight keys to lay down some heavyweight, two-handed blues chords with resultant room-filling sound.

The rhythm section is also first-rate and an integral part of this unit. "Lights of the Foggy Highway" opens with a Gomez vamp that repeats, retreats, and reemerges throughout the piece, as White drives a syncopated pattern under him.

In general, the recording quality is excellent, particularly on the horn and piano, perfectly complementing the music. The bass, though, is emphasized more than it should be, sounding boosted and over-ripe. In fact, during the title track, Gomez (or someone near him) bumps a microphone, sending a loud, startling thud through the speakers. Forewarned is forearmed.

A terrific album, where the music is tops and the performances are first-rate, Blues for 4 makes a strong case for the international universality of music.

Love and Hope; Robot's Blues; Sundial; Another Question; Lights of the Foggy Highway; Life for Two; Well, Where is the Airport; Blues for Four.