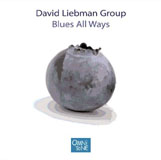 While the blues is one of the clearest roots of conventional jazz tradition, few but saxophonist Dave Liebman could release an album that covers as many stylistic bases as Blues All Ways.

There's good reason why Liebman can create a blues homage ranging from the 7/4 Memphis shuffle of "Elvis the Pelvis" and lithe, harmonically sophisticated swinger "Down Time" to the ethereal "Riz's Blues." With a quartet with this much shared history, the saxophonist has a lean but highly flexible unit that can not only handle anything he throws at it, but can lob more than a few surprises back at him. Any release from this group is worth hearing but Blues All Ways, like the largely undiscovered masterpiece Conversation (Sunnyside, 2003), stands out amongst its growing discography.

A quick look at Liebman's forty-year career reveals a player for whom there's nothing not worth pursuing. From free-flowing acoustic duets with pianist Marc Copland to the dense jungle funk of Miles Davis' 1970s fusion, Liebman's ability to thread a stylistically multifaceted needle with a personal approach that combines the expressionism of John Coltrane with a more concise focus makes him not just the most accomplished soprano saxophonist alive today, but an equal threat on tenor as well.

He's also got a sense of humor, opening the rocking "Elvis the Pelvis" with the most bluesy wood flute you'll ever hear; trading licks in free time with Vic Juris' gritty electric guitar before the group settles into a definitive shuffle. Even when this quartet kicks out the jams there's greater depth to the harmonies as it straddles the line between rock attitude and jazz complexity.

As visceral as Liebman is, the underappreciated Juris is equally compelling—a guitarist who, like Liebman, is predictable only in his unpredictability. Even when soloing with a mix of imaginative lines and self-accompanying chords, the injection of a brief series of Lenny Breau-informed harmonics here or a touch of flamenco finger-picking there make it clear just how broad his reach is. Juris also contributes two compositions to this largely Liebman-penned set: the Eddie Harris-like soul/jazz of "Compared to Who" and the metrically challenging "Blues Tripper," which proves him a textural equal to the better-known Pat Metheny, John Scofield and Bill Frisell.

Throughout, bassist Tony Marino and drummer Marko Marchinko handle the shifting landscape with commitment and credibility. Neither gets much solo space, but their keen intuition and flexible grooves make them as vital to the group as Liebman and Juris.

An ambling "Bessie's Blues," by Coltrane, closes the album in more conventional territory, but Juris' combination of bluesy bends and outré lines, alongside Liebman's mix of bebop phrases and occasional screams, makes this a valuable take on this often-covered standard.

Liebman couldn't have picked a better title than Blues All Ways—an album that proves that even the simplest of premises has infinite potential in the hands of a group that's this well-connected and stylistically unfettered.

Elvis the Pelvis; Down Time; Riz's Blues; Blues Mirage; Compared to Who; 64 Strings and a Reed; Blues Tripper; Bessie's Blues.