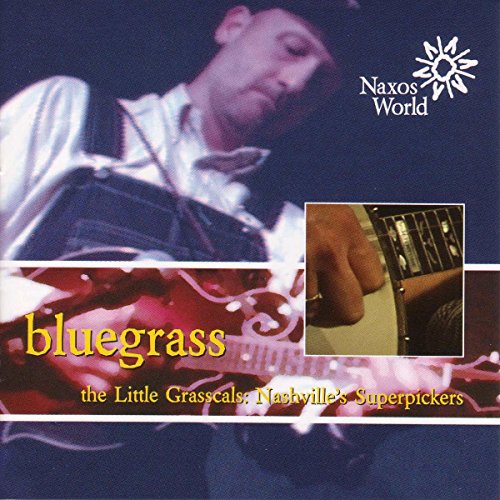 Bluegrass is an indigenous American music that has its roots in the Irish Celtic tradition of the 18th Century. After colliding with country & western and blues music, bluegrass emerged as America’s "folk" music. As such, this remains an oversimplification, as the music is as much an amalgam as the American population itself.

Bluegrass enjoyed a renaissance in the early 1970s with the release of The Nitty Gritty Dirt Band’s three-LP set, Will The Circle Be Unbroken, followed a couple decades later by the heralded soundtrack to the Coen Brothers' O Brother, Where Art Thou. Notable suggestions of authentic bluegrass include Bill Monroe’s The Essential Bill Monroe (Columbia/Legacy, 1992) and the Carter Family’s My Clinch Mountain Home 1928—1929 (Rounder, 1993).

For the uninitiated, I would also suggest the newly released Bluegrass—The Little Grasscals: Nashville Superpickers. This collection of 18 bluegrass anthems is performed with the necessary precision and grace characteristic of traditional bluegrass. This recording offers the real deal in sonically ideal confines, an issue often noted with the older recordings.

The Little Grasscals are a group of Nashville elite studio musicians who take this handful of traditional songs, turning them to gold with a complex alchemy of superior musicianship, experience, and love. Characteristic of bluegrass vocals is the "high lonesome" tenor employed by the greatest of the music’s singers. But of equal importance is the instrumental component to the music. It is typically made up of virtuoso performances. Vocal or instrumental, bluegrass is a complete art form, exciting and essential.

Nashville native Terry Eldredge kicks things off with a picture perfect "Nine Pound Hammer," his voice perfectly suited to the music. The band presents the music effortlessly with not a wasted note. Rob Ickes’ dobro playing is among the best I have heard, as is Dave Talbot’s banjo picking. "The Gospel Plow," sung here by Dave Talbot, touches on the Puritan esthetic of the Appalachian region. "Come All Ye Fair and Tender Ladies" is a heartbreaking ensemble piece that showcases that high tenor harmony performed by Jamie Johnson.

Most provocative of the vocal pieces is "I The Man, Thomas," a tome of Jesus confronting Thomas on his lack faith, sung by Jamie Johnson, who is a dead ringer for a young Ralph Stanley. This is the centerpiece, the "I Am A Man of Constant Sorrow" of this collection.

It is interesting and most appropriate that Naxos World would choose bluegrass as the music to represent the United States. It possesses all of the soul of rural blues without it raggedness, all of the invention of country without the corn, and all of the virtuosity of jazz without its obtuseness. This disc is too good to be true; it's a homerun for the musicians who made it. This is the most highly recommended recording of the year.