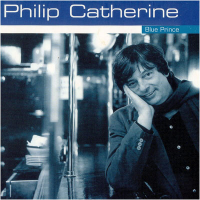 Following up on his more aggressive Guitar Groove release, Philip Catherine presents a more varied, but no less lively, approach on his newest Dreyfus CD, Blue Prince. Working with a like-minded musician, trumpeter Bert Joris—who in some respects is his foil—Catherine and he share an instinctive ability to cut to the heart of a tune and personalize it. Working in tandem or solo as the relatively short tracks proceed from statement to elaboration, Catherine's quartet effectively makes its musical point and moves on to the next number.

Possessing a multitude of talents that have formed from multiple influences, Catherine on Blue Prince displays the breadth of his talent, which remains fresh and innovative after more than 30 years in the business. Less well known than American guitarists backed by larger labels owned by media conglomerates, Catherine's lack of accessibility to North American jazz listeners is remedied by Dreyfus' loyalty to his energetic and technically impressive style.

Having been born in London, Catherine's parents chose to return to his father's native country, Belgium, where he grew up. Having been inspired, as were most other guitarists, by Django Reinhardt, Catherine chose to remain in Europe. He carved out a reputation there with the continent's top musicians like Stephane Grappelli, Niels-Henning Ørsted Pedersen, Kenny Drew and Jean-Luc Ponty. Catherine's duo work with Larry Coryell led Coryell to move on to further remarkable guitar duo recordings with John Scofield, Emily Remler, Joe Beck and John McLaughlin. And it's obvious on Blue Prince that Chet Baker's influence on Catherine remains, Joris' lyrical and bright approach to ballads is a reminder of the work on the Baker/Catherine album, Strollin'.

All of those influences converge on Blue Prince, each track quite different in attitude and execution from all of the others. The opening number, "Coffee Groove," develops the edginess implied by the name. Catherine's racing but controlled electric guitar work brings forth lines seemingly developed more for horns than guitar. Then, Catherine takes charge of the tune, bleeding pitches and altering dynamics before Joris comes in to squeeze out long tones before bop-derived sixteenth-note flurries.

In contrast, the next tune, "Global Warming," emerges from Catherine's and Joris' low-register half-note movement before Catherine takes up the urgency of the theme with melodic persuasiveness through self-accompaniment.

And yet, even after two tracks, the totality of Catherine's expansive concept isn't complete. The quartet moves into "With A Song In My Heart," which Catherine plays in a rich acoustic straight-ahead fashion without embellishment or deviation from the strength of the song itself. The quartet does the same thing when they perform Eubie Blake's "Memories Of You" later in the album, another of their get-in-and-make-your-point-and-get-out, no-frills jewels that pack loads of content into a short performances.

Yet another facet of Catherine's character is revealed on "The Creeper," whose chorus employs modified Wes Montgomery voicings before it dissolves into eloquent solos. "The Postman," on the other hand, is a breezy number allowing the musicians to stretch out as the bass walks and the guitar talks and the trumpeter chalks up another sweet and convincing improvisation combining eighth notes and eighth-note triplets. "Sweet Lorraine" ends Blue Prince in an easy swing employing I-VI-II-V changes at the repeat. Bassist Van de Geyn takes the lead on the tune as Catherine lightly backs him up. Finally, that clear, assured guitar sound comes in to complete the diversity of styles presented on the album.

Catherine has managed to blend all of his seemingly disparate interests into a compelling whole on Blue Prince, a complete summary of his vast talents.