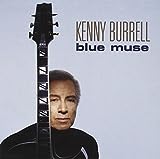 Since the '50s, Kenny Burrell has contributed crucial titles to some of the most important jazz labels, including Blue Note, Verve, Columbia, and Muse. For his 96th album, Burrell sticks to what's worked well for him over the past fifty years: some blues, some Ellington, some swing, and several ballads, all played with beautiful tone and exquisite taste. To keep things fresh, Burrell adds some unusual flavors to the stew: acoustic guitar and voice.

At the dawn of his lengthy career, Burrell sang solo on Detroit TV. He also sang on Weaver of Dreams (Columbia 1960) and the recent Lucky So and So (Concord 2001). While George Benson can continue to sleep undisturbed, Burrell generally acquits himself as a straightforward reader of lyrics on four of these tunes.

With drummer Sherman Ferguson and especially bassist Roberto Miranda lighting a fire under the swinging groove of "Mark I," the set begins with classic Burrell, his effortless technical prowess and often-imitated tone intact. The ballad "My Friend Ray" pays tribute to the late Ray Brown, pianist Gerald Wiggins treating Burrell's chords, octaves, and solos as another voice to showcase, sensitively dressing each measure to the sweet sounding guitar's advantage. Miranda deftly dances through the arrangement without adding clutter.

"On the Wings of Spirit," finds Herman Riley joining the proceedings on flute and Burrell playing a steel string acoustic in a Brazilian mode. "Then I Met You" returns Riley to breathy flute as Burrell sings a self-penned ode to his wife. While it can be argued that the sentiment and the vocal (and the synth string section) were better left at home, Burrell's solo offers a glimpse of what could have been a more evocative instrumental.

"It's No Time to be Blue," a version of Kenny Dorham's "Blue Bossa" with lyrics, works better. The emphasis remains on Burrell's acoustic guitar, with the vocals basically stating the theme. "3/4 of the House" recalls Miles' "All Blues" and happily steers the program away from a sentimental rut. Riley slathers soulful tenor all over the tune, pushing Burrell into familiar blues territory. Monk's "'Round Midnight" brings the tempo back down, but features Burrell's best vocal of the collection, although the tune's angularity is all ironed out.

Now celebrating his fruitful twenty-five year association with UCLA, his reputation untouchable, his place in jazz history assured (he was, afterall, Duke Ellington's favorite guitarist), and with over two hundred album appearances in addition to his nearly hundred as leader, Burrell will hardly live or die by Blue Muse. But this self-produced effort seems to argue in favor of an objective sympathetic hand to help steer number ninety-seven.

Visit Concord on the web: www.concordrecords.com

This review first appeared in All About Jazz: Los Angeles .

Mark I, My Friend Ray, On the Wings of the Spirit, Then I Met You/ It's No Time to be Blue, Blue in Green, Blue Muse, Solitude,