Blue Highways and Sweet Music: The Territory Bands, Part I

By KARL ACKERMANN
June 25, 2018
Sign in to view read count
One of the oldest small cities in Texas, Henderson thrived during the Great Depression thanks to the discovery of oil six miles beyond the town limits. Quadrupling its population in a matter of months, it was the quintessential boom town but it hardly had an idyllic history. It burned to the ground in 1843 leading to the questionable accusation of a northern abolitionist who was hung—and shot—by a mob. In the 1960s there was another reputed attempt to torch the town by outsider "hippies." Henderson's largest employer is a prison and one of its three jailhouses dates back to the Jazz Age. Nevertheless, the growth of the town brought amenities and entertainment venues that made it a choice destination for territory bands. In her 2007 thesis Where East Texas Dances: The Cooper Club of Henderson, Rusk County, and Popular Dance Bands, 1932-1942, the researcher Michelle Linsey Holland chronicled a history of the rural nightclub, popular with territory bands. At the time of the oil strike (1931) Henderson's chief source of revenue was cotton, but drought conditions and the collapsed economy had taken its toll on agriculture. Holland points out that the living and working conditions of blacks in Henderson had barely changed since slavery ended and, in some cases, became worse. Some blacks found employment in oil-related jobs but the majority remained as tenant farmers facing rising living expenses and land cheats. Race issues aside, Henderson was ripe for a more robust entertainment scene, and a local entrepreneur, Hugh Cooper, was accommodating to all the town's residents.

Cooper was not a man of means but certainly one of conflicting influences; religious, a non-drinker, and pragmatic he nonetheless married a women twenty years younger than himself, and his idea for a dancehall was more of a whim without an obvious business plan. After having to borrow almost all the necessary funding, Cooper's impulse became a barn-like structure with a capacity of almost three-thousand people. The Cooper Club formally opened in 1935 and proved Cooper to be quite shrewd. The dancehall was immediately successful based largely on Cooper having signed a booking arrangement with the Music Corporation of America (MCA) allowing him to be the first access to top talent in—or passing through—East Texas. Two years later the club burned to the ground but Cooper took his significant profits and rebuilt down the road. Five years later, Cooper opened a second dancehall, the Palm Isle, thirty miles north in Longview, Texas. He later sold the Palm Isle to Mattie Castleberry who owned dancehalls in several Texas and Oklahoma locations. Castleberry brought in "Taxi Dancers"—women who danced with the male patrons for a fee (as in "ten cents a dance,") and then split the fee with management. The two clubs booked Glenn Miller, Tommy Dorsey, Ella Fitzgerald, Jack Teagarden, Louis Armstrong, Paul Whiteman and many other well-known acts.

The Cooper Club would become the principal venue for music in East Texas; a nightspot that had a sophisticated air and the kind of quality talent that rarely made its way to locations such as Henderson. Cooper booked Herman Waldman's Orchestra, a popular Texas band whose members included trumpeter Harry James for a time. The Ligon Smith Orchestra, frequently booked at the high-end Adolphus, also made the trip to Cooper's club. He attracted Jan Garber's band as well. Garber was known as the "Idol of the Airwaves," because of his extensive career in radio performance and more than a dozen sides recorded. These were all white dance bands and they played for white-only audiences at the Cooper Club on all but one night each week. On those nights Cooper, who was white, not only opened the club to black bands and patrons, but roped off a "white section" where those customers could watch and listen, but not dance. Cooper could not advertise the black performance nights. Local newspapers were reluctant to offend white readers and the county sheriff had a reputation for breaking up shows that featured—or catered to—black audiences. Instead, Cooper himself would go into black neighborhoods and hand out fliers for the shows. He would also make tickets available at other outlets such as coffee shops and hotels; he was a strategic marketer ahead of his time. Beyond entertainment, Cooper was popular in the black community. He sold and financed homes to blacks, provided them with business loans and by all accounts collected in Holland's research, did not take advantage of blacks as so many other business people did. The crowning glory for the Cooper Club was booking Duke Ellington in 1935.

In the prime years of the territory bands, popular music was in a wild state of flux. Ragtime's popularity had faded and New Orleans style music gave way to the flavorless dance music of the early-to-mid 1920s. The prevalent styles of the era included show tunes, sweet music, and oddities such as the kitchen sink approach of Skiffle, where black musicians mixed homemade "instruments" like jugs and washboards, with conventional acoustic instruments. Stride piano had become popular in the early 1920s and a wave of jazz recordings came from stride pianist James P. Johnson (The Harlem Strut), Fats Waller and Count Basie. The dancehalls of the southern plains gave birth to Western Swing in the 1920s. The genre merged country music with polka, folk, Dixieland, jazz and blues; its rhythm and instrumentation bearing similarities to Django Reinhardt's Gypsy Jazz. The popularity of the Blues was spreading with singer Mamie Smith recording twenty songs in a band that featured Coleman Hawkins. Race Records came into existence in the 1920s with labels such as Okeh marketing black artists in jazz, blues, and gospel music, to black markets. Major record labels began their own race-based subsidiaries and black music spread to the white demographic. All of these activities helped whet the public's appetite for live music.

Part II of Blue Highways and Sweet Music: The Territory Bands moves north into the territories of the Great Plains as well as the undesignated "territory" of the Mississippi, Missouri and Ohio Rivers. The careers of some standout performers such as Alphonso Trent and Fate Marable will be examined. 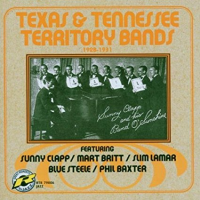 With the exception of the Race Labels, recording contracts generally went to white bands. Some of those bands are represented on Texas & Tennessee Territory Bands: 1928-1931 while others are difficult to identify at that level. Four of tracks are from Sunny Clapp whose own history is thin despite having written more than a half-dozen popular songs that had been recorded by Dizzy Gillespie, Etta James, and Charles Mingus.

Slim Lamar's Southerners account for seven pieces on Texas & Tennessee Territory Bands. Another artist whose history is all but lost, Lamar's Southerners played Biloxi, Mississippi, Memphis, Tennessee, Louisville, Kentucky and as far north as the Egyptian Room of the Kosair Hotel in Indianapolis. 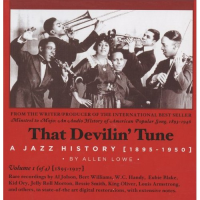 That Devilin' Tune: A Jazz History (1895-1950), Vol. 1 (1895-1927) is an ambitious and wide-ranging collection of nine CDs. Taken from their original 78rpm format, it is an assortment of names that may be familiar listeners with a sense of history, as well as those who are unknown. Information on the tracks is scant and there are some tracks that are not as listed.