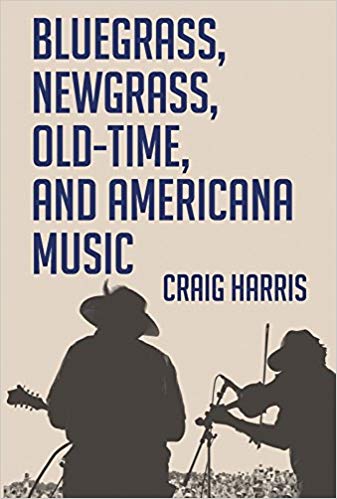 Musician/author Craig Harris' previous book, The Band: Pioneers of Americana Music (Rowman & Littlefield, 2014) focused intensely on a single pixel in the universe he reveals in his present expansive and well-researched Blue Grass, Newgrass, Old-Time, and Americana Music. Copiously referenced and filled with Harris' obvious love of the material for which he writes, Blue Grass, Newgrass, Old-Time, and Americana Music emerges as a history, easy to read and enjoy: a story told by an engaging personality who wants the reader to be as passionate about the content as he is.

Harris begins his all-important introduction with a swirling miasma of names including (Adam) Manly Reece, Moran Lee "Doc" Boggs, Fiddlin' Joe Carson, Eck Robertson, and "Uncle Dave" Macon, all contributing to the early history of what we can presently call "Bluegrass" music. This swirling creative evolutionary miasma tacitly lights on the year 1923, when the first recordings of the antecedent music were made. The author then, at light speed, travels to the period between July 25th and August 5th 1927, when Ralph Peer, of the Victor Talking Machine Company, set up shop on the third floor of the Taylor-Christian Hat and Glove Company on State Street in Bristol, TN where ground zero of country music occurred, with Peer recording both the Carter Family and Jimmie Rodgers within days of one another.

These Bristol recordings are part of a pre-war recording diptych, one side white and the other black. Surrounding the period Bristol sessions were taking place Louis Armstrong was recording some of his most famous Hot Fives and Sevens for Columbia and Okeh records; Bessie Smith recorded "A Good Man is Hard to Find" and "Send Me to the 'lectric Chair." The next year, 1928, saw the seminal recordings of Eddie "Son" House, Tommy Johnson, Mississippi John Hurt, Blind Willie McTell, Blind Lemon Jefferson, and Blind Willie Johnson. Two musical genre recorded for two different populations with an undeniable crosspollination between the two. Knowing only one of these stories is not knowing the whole story of American Music.

Like any biography, Harris briskly accounted for the infancy of Bluegrass and related music as an introduction to the first significant artist. Harris notes that Jimmie Rodgers turned the quaint sound of this "mountain" music on its ear, and for a brief period, the early recording industry was thriving. That came to an abrupt end in 1929, with the Great Depression, after which, this "ole timey" music sounded exactly that: quaint and sepia-toned. As America emerged from the Great Depression, the original fans of this early Bluegrass music looked to a more stable and sophisticated future. This future was realized in William Smith Monroe, "Big Mon" Bill Monroe.

And from there, Harris tells the story of Blue Grass, Newgrass, Old-Time, and Americana Music in an engaging, almost conversational way, in spite of the elaborately dense scholarship and copious references he draws from and includes in the book. From the earliest recordings in the 1920s to the Earls of Leicester today, Harris provided one of the most comprehensive histories available for this amorphous class of music. Harris does not stop with the matters at hand, he deftly demonstrates the long reach of Bluegrass and associated music into every popular music. Harris is as likely to discuss Leftover Salmon as he his Dr. Ralph Stanley. This book is for any music fan, not just fans of the title music.