By HRAYR ATTARIAN
December 11, 2011
Sign in to view read count 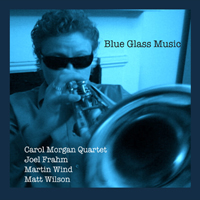 Trumpeter Carol Morgan is an improviser par excellence, having literally written the book on it, and her style has matured fast over the course of five years and four albums.

Blue Glass Music showcases the trumpeter's explorative solos, which are often edgy, like on "I Love You," complemented by Joel Frahm's bluesy tenor and taking the trend of thought where she leaves off and bringing it full circle to the melody. This ethereal dance of the horns is anchored and propelled by the earthy grooves of rhythm duo Matt Wilson (drums) and Martin Wind (bass).

Wilson's percussion instruments chime and his bass drums beat in tune with Wind's arco bass on either end of Ornette Coleman's "Lonely Woman," creating an African ambience. Morgan embellishes the melody, followed by Frahm, who lags a few bars behind as he stretches further and further out while Morgan sounds delightfully atonal at times, and languidly oriental at others.

Even when she stays close to the actual tune, Morgan does not sacrifice creativity; "Booker's Waltz" is delivered in the spirit of trumpeter Booker Little and woodwind/reed multi-instrumentalist Eric Dolphy' collaboration, rather than being merely slavish mimicry of the original.

Frahm's "Glyph," with its unusual time signature, provides the quartet the most room to roam free; with Frahm's John Coltrane-inspired sound, Morgan is out there yet still quite logical, while Wilson's manic drumming covers the gamut between arhythmicity and hyper-rhythmcity, with tight group interplay preserving the composition's integrity.

Elsewhere, the group covers more traditional territory on the bop-ish "April in Paris," with its swinging drumming, walking bass and rapidly progressing saxophone and trumpet solos. On the heartfelt "Las Waltz," Morgan's open trumpet and Frahm's mournful tenor redefine the meaning of a waltz, while their romantic duet on the balladic "Where Are You" highlight s their versatility.

In covering a wide range of jazz subgenres, Morgan is not only able to intrigue and interest on Blue Glass Music , but also proves an exciting leader and musician—both inside and outside the mainstream.

I Love You; April In Paris; Lonely Woman; Booker's Waltz; Glyph; Where Are You; Last Waltz.