By C. MICHAEL BAILEY
May 25, 2017
Sign in to view read count
The Beatles songbook has been coming into blues and jazz focus over the last decade as evidenced in the recordings The Blues White Album (Telarc, 2003) and Let It Be Jazz: Connie Evingson Sings The Beatles (Summit Records, 2003).

Two recent records pop to the surface reprising this interest. 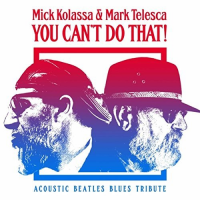 The Beatles songbook is a hard sell when it comes to blues interpretation. For all its best intentions, The Blues White Album never quite lived up to its promise and I believe that it is because the majority of the Beatles' most popular songs were moving away from the blues and R&B roots of the band's early recordings and toward the pop music genre that the Beatles single-handedly created. That said, I am glad that there are those intrepid blues musicians with the guts to take a hard swing at the sacred book. Mississippi Mick Kolassa and Mark Telesca do exactly that with You Can't Do That— Acoustic Beatles Blues. "Got to Get You Into My Life," "Why Don't We Do It in the Road," and "She Came in Through the Bathroom Window" work the best cast among the front porch acoustic instrumentation provided here by Kolassa, Telesca, and producer Jeff Jensen. The title cut is also the recording's centerpiece, showing the blues roots through the threadbare pop denim. The two principles' singing is sincere and authentic, each meeting at the crossroads of their pedigree and popular music. 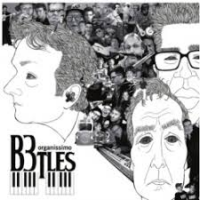 The trio Organissimo has never been afraid to take stylistic chances, not that an organ-guitar jazz trio interpretation is that farfetched. Wes Montgomery, Grant Green, and Larry Young all played the Beatles, often in real time. Here, Jim Alfredson puts together a recital of Fab Four favorites funky as mustard and smooth as mayonnaise. Do not be looking for greasy, chitlin' circuit performances here. Guitarist Lawrence Barris and drummer Randy Marsh join Alfredson in injecting a degree of jazz sophistication into this book. The band crafts these songs for the concert stage as well as the sepia-toned lounge. "Dig a Pony" and "Come Together" prove very effective in this funky organ trio format, while "The Long and Winding Road" and "While My Guitar Gently Weeps," pop all the way out of the funk arena into something else altogether. Organissimo's interpretations here benefit from the distance from the originally recorded music. These guys have had a long time to consider this material.