By CLIFFORD ALLEN
January 1, 2007
Sign in to view read count 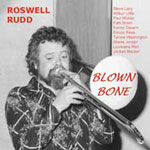 Trombonist and composer Roswell Rudd's third decade on the modern jazz scene showed listeners something more than a robust Archie Shepp sideman or a co-leader of the New York Art Quartet. For those accomplishments alone he would have been revered, but the '70s saw his palette expand into orchestral composition and varied long-form suites, as well as a burgeoning interest in African and Asian musics that has recently come into flower.

Originally released on a scarce Japanese Philips LP, Blown Bone captures Rudd and some of his regular cohorts in vibrant small and medium-sized groups performing the suite of the same name (originally conceived in the late '60s). This CD reissue also includes one 1967 small-group track featuring the late altoist Robin Kenyatta.

The opener, "It's Happening, aesthetically shares much with Steve Lacy's Trickles (Black Saint). Both were recorded in March 1976 and this piece brings together Rudd, Lacy, trumpeter Enrico Rava (whose own group of the period also featured Rudd), bassist Wilbur Little and drummer Paul Motian. The tune consists of a lilting head formed of chirps and earthy downbeat nesting, a perfect vehicle for Rudd's slushy tailgate, Rava's brassy pecks and Lacy's golden growl.

On the heels of sessions like Numatik Swing Band (JCOA) and Flexible Flyer (Arista-Freedom), a Monk-y free-bop rouser like "It's Happening fills the date with a marrow sometimes lacking in Rudd's mid-'70s groups. Vocalist Sheila Jordan, a regular associate of the trombonist, augments the quintet on "Blues for the Planet Earth and "You Blew It, dusky swaggering laments which blend pro-environment lyrics with free-time tone poetry and a clenched ensemble sound.

The second half of the disc augments the initial quintet with clarinetist Kenny Davern, tenor player Tyrone Washington and pianist Patti Brown, as well as blues guitarist/vocalist Louisiana Red and sculptor/percussionist Jordan Steckel on one track each. Red's feature, "Cement Blues, blends his slippery electricity with a roguish ensemble thrum, Washington's husky tenor fitting perfectly into the tune's rough-hewn and swampy urbanity.

Blown Bone cements the breadth and diversity of Rudd's art, from the strangely poised Afro-funk of "Bethesda Fountain to the eerie freedom of "Blues for the Planet Earth. It's a shame, though, that such a telling document as this was virtually buried until almost thirty years after its initial release.